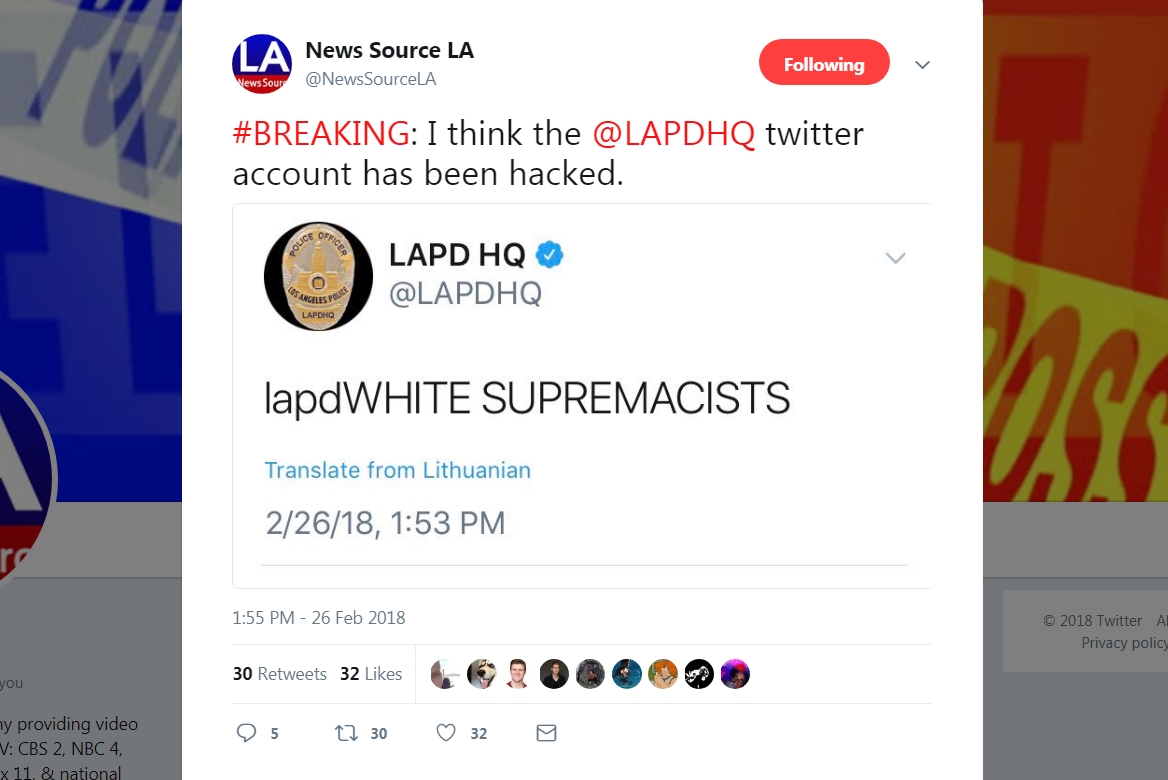 However, the Police department was quick to act and the tweet was taken down in 5 minutes but some eagle-eyed social media followers were quick to take a screenshot of the insulting post and let the department know. The twitter followers even wrote out their own tweets asking LAPD if they were okay and told the LAPD HQ to get it together.

The LAPD’s public information director Josh Rubenstein confirmed that the twitter account was in fact hacked and claimed to the Los Angeles Times that they are now working to lock it down. It is still not known who the hacker was and how the hack was carried out, no individual has come forward to claim responsibility for the insulting tweets. Furthermore, officials do confirm that this tweet was not posted by anyone from the LAPD staff.

The LAPD later tweeted out that “We are aware that out # LAPD account was compromise and we are not taking proper steps to solve this issue.” In a separate tweet LAPD even wrote that, “Earlier today LAPDS Headquarters Twitter account was compromised and it proved that the cause was vulnerability in a third-party social media application”

They further continued saying “ We have and will continue to work with Twitter to increase protection on our social media account” This intrusion is not something new since police departments, schools and government organizations have been targeted by these hackers and pranksters for a while now.

Just last week the Colorado Department of Transportation was attacked by the SamSam ransomware and this virus forced them to shut down 200 of their computers. Furthermore, the computer systems in Allentown, Pennsylvania was also hit with an expensive virus which involved the Emotet Trojan and it also forced them to turn off multiple systems making the situation very critical. The hacker-attack on Allentown will cause the city an estimated $1 million to help them recover as it caused a lot of damage.

Anyhow, Twitter hacks are becoming increasingly common with various celebrity profiles, accounts of government officials being hacked and being taken over. In January the accounts of top Indian diplomats Syed Akbaruddin and the World Economic Forum’s president Borge Brende also had their accounts hijacked.

In 2016 and 2017 the hacking OurMine hacked the accounts of many high-profiled personalities and let a similar message that was later called their signature message that said “testing your security” and even asked the account owners to contact them directly.