A lot of changes are made in Windows 10 which helped it recover from all the mistakes Microsoft did with Windows 8. But, not all of those changes are good, though. Microsoft has shown a little tendency to get too casual with how it promote their services within the Windows. Maybe you can even call these “ads.” Microsoft will, of course, dispute on that description. Some of these add-like things have started showing up in the File Explorer. To be more specific, Windows 10 has started random pop-ups to provoke the people to buy a subscription to the OneDrive.

Every Windows 10 user gets a 5GB of Microsoft’s OneDrive cloud storage which is a service is built into Windows 10 and tied to the user’s Microsoft account. The useisr can upgrade his cloud storage space to as much as 1TB for a single user. The package also includes an Office 365 subscription. Based on their needs, this may be a good deal. But, that does not mean you have to know about the deal in the midst of your browsing right?

This ad appears as a banner at the top of File Explorer, and reminds the user  that he can take the OneDrive and Office 365 package for a mere $6.99 per month. You can choose the offer or just dismiss it like the most of the Windows messages we ignore. But, this may just reappear after sometime though. Some users have reported seeing this a few months ago, but this incidence got intensified in the last week or so. This is not first time Microsoft has crammed ads into their Windows UI — there has been lock screen ads which have disguised as backgrounds and then we have notification ads for Edge, and also a strange pop-up ad for Microsoft’s personal shopping assistant in Chrome. 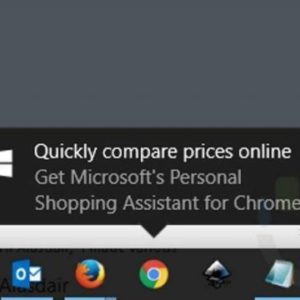 The OneDrive advert in File Explorer is much less subtle than some of Microsoft’s past Windows promotions.