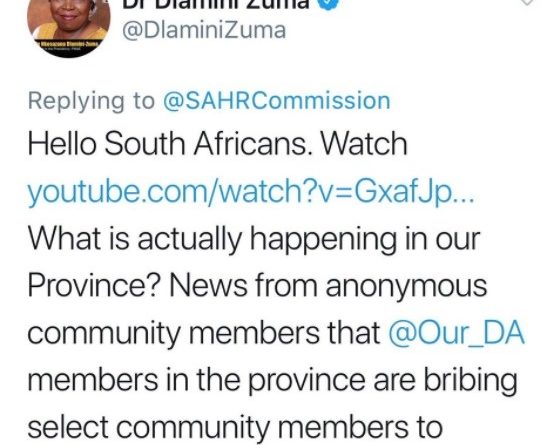 South African minister Dr Nkosazana Dlamini-Zuma has denied responsibility for a tweet on her official Twitter account that accused the DA (Democratic Alliance) members of bribing individuals to create chaos in the North West province.

The tweet read, “Hello south Africans. What is actually happening in our Province? See this youtube.com/watch?v=Gxafjp… News from anonymous community members that @Our_DA members in the province are bribing select community members to cause chaos in the Province? Good day to you.”

Dlamini-Zuma later issued an apology saying that the tweet did not represent her views and was the result of a cyber-hack. The apology tweet said:

“My sincere and deepest apologies to @Our_DA, it’s supporters and leadership for the previous tweets. They are NOT my views. My account has been hacked and this sinister act is most unfortunate at a time when I’m paying my last respects to my comrade.”

She further added saying, “I will take responsibility because it is my Twitter account and I’m a public figure but rest assured that those are NOT my views. Again I apologize.”

The allegations came at a time when the town of Mahikeng has been undergoing violent protests. In a mocking response, the DA leader Mmusi Maimane who was visiting Mahikeng on Saturday claimed that her tweet was “sheer nonsense”.

He also tweeted saying, “Dear Minister. This is a serious fabrication, with no truth to it. The violence in Mahikeng is a result of ANC ignoring the people. I will happily go with you there tomorrow and we can see what evidence these “anonymous community members” have to back up this claim. Let me know.”

He also added another tweet that said, “Supra remains in office, hospital and clinics are dysfunctional. So while the Anc engage, South Africans in #Mahikeng are left without service. Our worry is what happens when KZN, FS, MP and other provinces face similar. May we have a peaceful and speedy resolution.”

Mmusi Maimane also claimed; regarding Dlamini- Zuma’s tweet that, “It shows that she is not fit for leadership. It shows the ANC doesn’t care about the people. People are raising legitimate concerns here.

He further added saying, “For Nkosazana Dlamini-Zuma to tweet about such issues, A, [it shows] how distant the ANC is from the people and B, how much they don’t really care. No-one has been paid. People want to fabricate rubbish like that shows that these people no longer know what is happening in South Africa, let alone care for the people of South Africa.”

Van Damme wrote, “I see @DlaminiZuma has now deleted the tweet. Will she claim she was “hacked” again? An apology to SA is needed!”

After Dlamini-Zuma claimed she was indeed hacked and offered an apology, Phumzile Van Damme, sarcastically added saying, “Naughty hackers always posting outrageous tweets on her account. It only happens to her, no other high profile politicians. Poor her.”