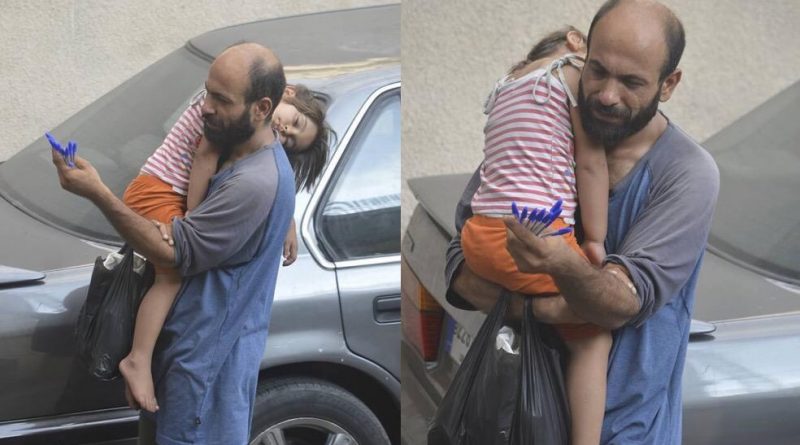 This heat breaking photo of a Sryian refugee man selling blue ballpoint pens on the streets of Lebanon while carrying his young daughter went viral – it has raise over $170,000 on Indiegogo.com

Syrian father selling pens in the streets of #Beirut with his sleeping daughter #Lebanon #Syria pic.twitter.com/KOz4mjW1rd

After the photo of Syrian refugee went viral, the internet track down Abdul Haleem al-Kader. Gissur Simonarson explains how he tried to help Abdul Kader and his 9-years-old daughter

I (@GissiSim) shared two photos of a Syrian Refugee and his sleeping daughter selling pens on the streets of Beirut, Lebanon. I was overwhelmed with requests to help this man, so I decided to see if I could locate them. Within 30 min of tweeting the photo with @Conflicts account, I was pointed to a twitter user @CaptainMaj, who told me that he saw this man every day around his house. Next I got contacted by Jessy El Murr (@JessyTrendSKY) from Sky News Arabia who got me in touch with Carol Malouf (@carolmalouf) who runs an aid organization Lebanese4Refugees. Long story short, we were able to find him and now have a secure way to get this man the money we raise here.
Thank you to everyone who has supported this. It’s nice to see people come together and make a difference in another persons life.

Simonarson also created a Twitter account @Buy_Pens (#BuyPens) .Simonarson began a campaign on August 26th in Indiegogo to help Kader and his daughter, and it has raised over $170,000+ though the goal was to raise $5,000 in 15 days.

I was surprised to know that people abroad heard about my story and care about my kids,” Kader told BuzzFeed News. “I couldn’t hold my tears. I kept saying, ‘Thank god, thank god,’ and hugging my kids.
I don’t need money. All I want is to educate my kids,” Kader repeatedly told BuzzFeed News, “send them to school, help them to get their education.

Simonarson says that he’s currently working with UNICEF to find out a way to turn over the funds raised for Abdul and his family. You can help Abdul Kader and his 9 year old daughter by donating money on Indiegogo