An extremely popular flashlight application for Android devices which is available from the official Google Play Store is showing malicious ads that try to fool users into installing potentially harmful applications on their android devices, according to the Trend Micro security researchers. While apps that show ads are very much found in the Google Play Store, this app shows ads with a scareware tendency that tell users that their device is infected.

Well experienced users who are aware of such ads will uninstall this app without clicking into the ads, but less experienced users might click the ad which will lead them to download another app, a so-called virus remover or antivirus which is harmful to the device. Security experts call these types of apps PUAs (Potentially Unwanted Applications).

Some of the reviews about this app from users in the official Google Play Store : 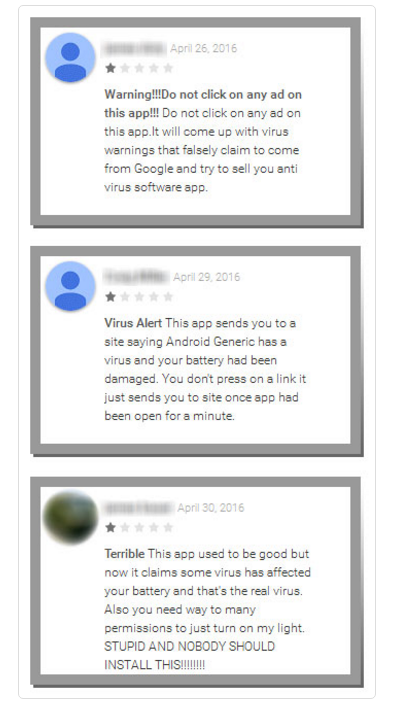 Currently the app is still available on the Google Play Store, where Google reports that users installed the app over 100 million times. As most phones don’t have a built-in flashlight functionality these days , which is why users tend to install one from the store where it is available for free. So have been taking advantage of these over the year crooks have often used games and flashlight apps to distribute malware to users. It’s a fact that over 0.15 percent of all Play Store app installs in 2015 contained malicious code.

Might be nice to know WHICH App the article is talking about, given the number of flashlight apps out there…