Malik Obama the President Barack Obama’s half-brother who is a supporter of Trump has been lately popular in news. Recently on 29th Oct. evening his Twitter account has been hacked and taken down by hackers.

After his account got hackers, tweets appeared that abused both Hillary Clinton and Donald Trump, and also alluded to the fact that he uses a Yahoo email account (which may have been the source of the hack). 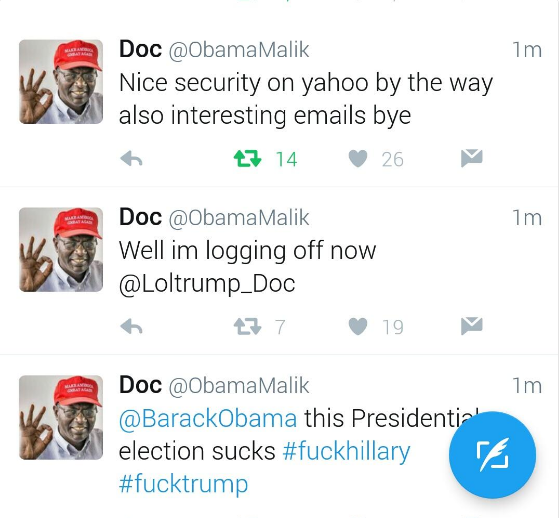 In his post-hack tweets, Malik also accused Russian president Vladimir Putin of hacking his account — a claim that seems far-fetched since Putin is also seen as a Trump supporter. Now Malik is back in control of his account, which was verified by Twitter late Saturday evening following the incident and all the offensive tweets posteed by the hackers were deleted.

He promptly reaffirmed his support for Trump, calling the Republican nominee the “White Malcolm X” and “Malcolm X resurrected.” He also declared that he would vote for Trump on Monday.

Hacker Accused Of A Lame Plan To Defraud Bank Out Of $1.5 Million