A couple of days ago, we have reported on a Dark Web vendor selling nearly 1 Billion accounts stolen from the Chinese Internet giants. Now, the very same vendor is selling something that is not only unique but also highly sensitive and something which Intelligence agencies around the world would take as a great chance to get their hands on.

Here the vendor is selling a database that has personal and cell phone number information of 126,761,168 citizens of United States that are taken from the United States Cellular Corporation (U.S. Cellular), which is a regional carrier that owns and operates the fifth-largest wireless telecommunications network in United States, with their services extended to 4.9 million customers in 426 markets in 23 of U.S. states.

The DoubleFlag claims that the database is updated till this month and has never been leaked on the Internet. According to him, the database has details such as first name, last name, state, address, city, and phone numbers of 126,761,168 Americans.

The price to buy this database is 0.5497 Bitcoin (USD 500). Which means anyone with access to this database can scan and check all the cell phone numbers and details of millions of American citizens. 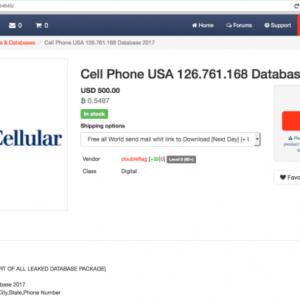 Inorder to confirm if the U.S. Cellular has actually suffered a data breach, hackread has contacted the company by using their website chat service where an operator has simply refused to provide media contact for their company, however, we are able to find three of their media contacts and an email was sent for an official comment as to whether the database breach on U.S. Cellular servers or not but it has been 24 hours since the email was sent to their media team and still there is no response whatsoever.

This is not the first time when personal details of US citizens were being sold on the Internet. Last year, a hacker going by the handle of “DataDirect” was selling full access to voter registration records of the US citizens on The Trade Deal marketplace.