Hacker Pwned Over 150,000 Printers and Spewed out Trolling Message

A grey-hat hacker with the pseudo name Stackoverflowin claims he’s trolled over 150,000 printers that have been been publicly facing.

According to an interview with Bleeping Computer the hacker says he wanted to raise people’s awareness to the dangers of having poorly configured firewalls, in this case publicly exposed printers.

This is the latest version of the message spewed out via people’s printers: 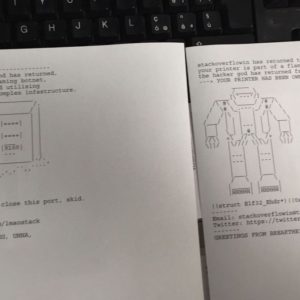 Hacker Pwned Over 150,000 Printers and Spewed out Trolling Message

Multiple printer models have been reported as being affected. Including brands such as Afico, Brother, Canon, Epson, HP, Lexmark, Konica Minolta, Oki, and Samsung.

Stackoverflowin said in a statement to Bleeping Computer that his script is designed to target printing devices that have IPP (Internet Printing Protocol)  port 631 and  LPD (Line Printer Daemon) port 515 and port 9100 open from insufficient inbound firewalling.

“Obviously there’s no botnet,” he says. “People have done this in the past and sent racist flyers etc.. I’m not about that, I’m about helping people to fix their problem, but having a bit of fun at the same time ; ) Everyone’s been cool about it and thanked me to be honest.”

The incident Stackoverflowin was talking about happened back in early 2016, when famous hacker Weev made thousands of Internet-connected printers print out anti-Semitic messages.

“This is you?” is the latest Facebook scam and It’s so Appealing