Charging Your Smartphone in Public Ports Leads to Data Hack

Having low battery in a smartphone is a real problem, especially when you are on a journey. If you find yourself in such situation, finding a USB port installed somewhere in public outlets seems to be a blessing. The public charging ports are now installed almost everywhere for the users and visitors convenience such as at cafes, airports, parks and planes, etc.

However, the Drew Paik from the IT security firm Authentic8 told the CNN that this is a very dangerous thing to do as it might be hacked and all of the data present in your phone can easily be transferred to the hacker.

Basically, Authentic8 is a developer of Silo web browser which facilitates anonymous web surfing. The revelation from the Paik is very surprising and concerning as he bluntly states that simply through plugging in phone into a hacked power strip or charger would lead to getting your device being infected at once and all your data will be at risk. The main reason is because, the cord which is used to send and receive data is used to charge the device.

For example, if you connect your iPhone to your Mac device using the same charging cord, you can easily transfer images and music from your mobile to your Mac. Hence, through compromising this particular cord, a hacker can extract all sorts of data from your mobile including emails, pictures, SMS messages, contact numbers, etc., without you having even a small doubt about it. 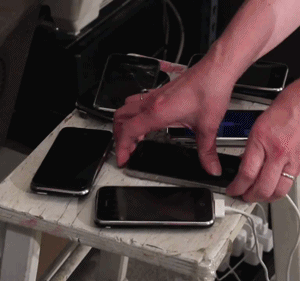 This kind of hacking is termed as “Juice Jacking“, which was a term created by security researchers back in 2011 and this was followed by the creation of another term called “Video Jacking“, which was introduced in 2016. This referred to phone’s ability to record everything that you typed or looked at due to being compromised by a hacked port.

FBI Is on the Hunt for 123 Cyber Criminals