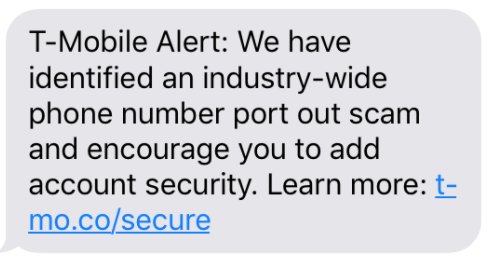 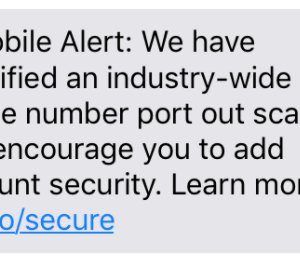 The number of cyber criminal activities is on a constant rise. Nobody is safe, from Twitter accounts to hospital computers, they are all being hacked and there isn’t much one seems to be able to do to prevent such hacks.

T-Mobile was recently in the news for a similar occurrence when hackers breached its system to gain access to personal records of hundreds of users.

T-Mobile in the United States sent an alarming and even perhaps confusing text message stating that the firm identified a massive ‘phone number port out’ scam, while encouraging their users to add account security.

The “phone number port out scam” is a pretty vague term, but it usually refers to a simple, yet extremely effective and highly dangerous hack. In this hack, scammers call T-Mobile or some other cell phone service provider and impersonate a target, requesting for a new SIM card for the phone number of the victim.

The same method also works by ‘porting’ the cellphone number to another provider, providing the attacker with the access to the victim’s phone number. This form of attack is also called as ‘SIM hijacking’.

As the provider issues a new SIM card, the fraudulent schemer can easily take over the victim’s cell phone number and then move on to other potential targets which are linked to it, like the social media or banking accounts.

Once the the phone is hijacked and is in the control of the hacker, they can utilize it to reset  bank account passwords by requesting the linked bank to reset it and send the link through text.

The same thing occurred in this T-Mobile hacked as the company announced it on its official site. Check here for steps to take in case you have been a victim.

These fraudulent scams are becoming more and more common by the day, and the T-Mobile phone hijacking is not the first even of its kind. While service providers are doing their best to reduce such scams, we as users should also up the game and have added security on our accounts.

Hundreds of Russian propaganda videos are still on Twitter