Facebook currently seem stuck in a labyrinth of data leaks as we hear news about data sharing and leaking on a constant basis. Lately, another confession from Facebook shocks 14 million users worldwide. A Facebook bug has made private posts of 14 million users exposed publicly during the past few days. However, Facebook authorities claim to have resolved the problem.

After repeated reports of deliberate data sharing, Facebook now seems to have landed in an involuntary problem. A Facebook bug was active for about 10 days during which many user posts that were shared ‘privately’ were made ‘public’. As many as 14 million customers have supposedly suffered this problem.

The software bug remained active from May 18 to May 27. Any posts shared within this period might be automatically shared publicly without users’ consent.

Facebook officials say the problem occurred as they attempted to build a ‘featured items’ option on the users’ profiles. This option supposedly highlights photos and other related content. Facebook aimed to make these featured items publicly visible. However, it accidentally turned on these settings for all new posts.

However, they have ‘recently’ addressed the matter, and have fixed it. All settings have now been reverted back to the default settings of the users.

“We recently found a bug that automatically suggested posting publicly when some people were creating their Facebook posts. We have fixed this issue,” says Erin Egan.

By default, Facebook allows its users to set privacy settings for individual posts. It depends on user preferences whether they want to share something with their friends, close friends, some exclusive contacts, or with the general public. However, during those 10 days stated above, a vast majority of virtually lost control over their privacy settings. 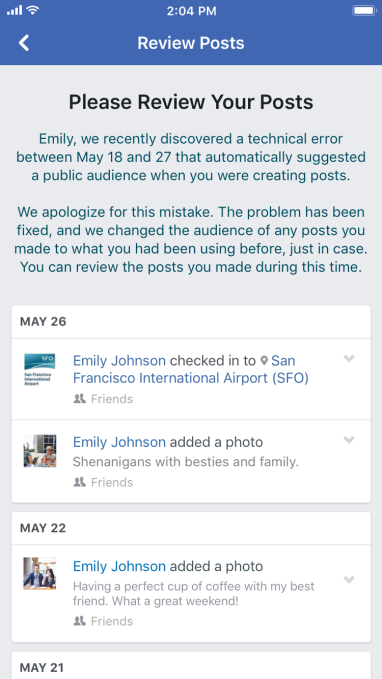 Erin Egan, Chief Privacy Officer at Facebook, apologizes for the inconvenience customers may have faced. He also clarifies that the glitch remained there only for the stated 10 days. Any posts shared before May 18 and after May 27 remain unaffected. According to his statement, Facebook will begin notifying its customers from Thursday.

“Starting today we are letting everyone affected know and asking them to review any posts they made during that time,” says Egan.

Some of the issue experienced recently from Facebook include sharing data with external device manufacturing firms. We also heard about the sharing of data with Chinese companies. The occurrence of such an incident right when Facebook is trying to regain its users’ trust on its privacy policies puts a question mark to its security measures and vigilance.

VPNFilter Malware Which Infected 500,000 Devices is Worse Than First Thought