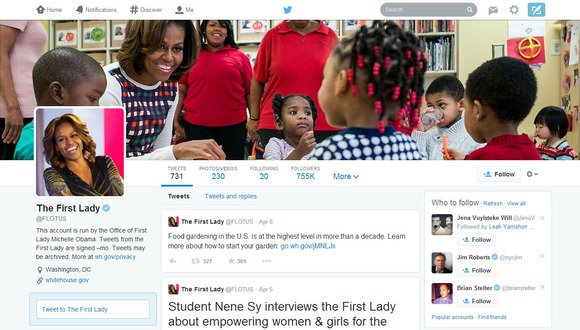 Twitter is betting that bigger is better with a new look designed to entice new users.

It’s the drastic change that Twitter needs to jump start its growth, even if it looks an awful lot like that other social network. The makeover’s similarities to Facebook are startling: The cover photo now spans the full width of your browser and is overlaid with a large profile photo. The emphasis on larger images replicates Facebook’s focus with its own recent redesign. But maybe the familiarity will appeal to Facebook’s 1.2 billion monthly active users, few of whom have embraced Twitter’s overwhelming stream of constant content.

Twitter is also changing the way you view tweets. The redesigned profile page lets you pin a tweet to the top, which will give other users an idea of what kind of content to expect from you. Tweets with a lot of retweets and replies will be larger than the other tweets in your stream.

Twitter looks different, but it hasn’t changed its ways. Your timeline still features a chronological view of tweets, although now each tweet has its own card instead of a solid stream broken up by only line breaks. When you look at other profiles, you can view timelines in different ways: all tweets, tweets with photos/videos, or tweets and replies. Previously, you could view all tweets or tweets with replies.

The redesign closely resembles the early tests first noticed by Mashable in February, but with a few tweaks. Like your News Feed on Facebook, your Timeline is now centered, bracketed on the left by your bio information and thumbnails of photos you’ve tweeted and on the right by Twitter’s follow recommendations and trending topics.

In a cognitively dissonant move, the new look affects only your profile page. Your home Twitter page, which you look at far more often than your own page—it’s where you read tweets from people you follow, after all—looks exactly the same.

The redesign is rolling out on Twitter’s website today for a small group of users and will soon be available for all users. Twitter is giving some high-profile users like First Lady Michelle Obama and actor Channing Tatum early access to the redesign. Newbies who sign up for Twitter as of Tuesday will see the new design immediately. The look is available only on the desktop version of Twitter and doesn’t affect the network’s mobile apps.