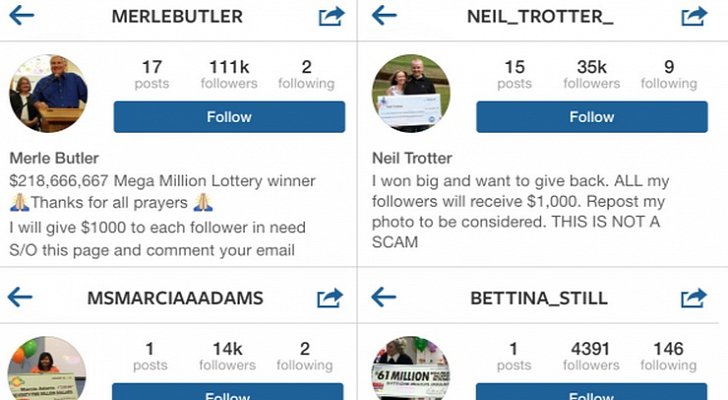 A lottery scam campaign has been making the rounds on Instagram. The scam accounts post messages claiming that they won tens of millions of dollars in a “Mega Million Lottery” and they want to give part of it to followers.

Symantec has been monitoring the scammy posts. The fraudsters create Instagram accounts that impersonate lottery winners in the United States and the United Kingdom. The following types of messages are being posted on the phony accounts:

“I won big and I want to give back. ALL my followers will receive $1,000. Repost my photo to be considered. THIS IS NOT A SCAM.”

The individuals whose names are used in the scam are real lottery winners. However, they have nothing to do with this and they’re not giving away any money to random internauts.

Once they have enough followers, the scammers get to the second phase. They create other fake accounts allegedly owned by the lottery winners’ accountants. Here’s what the messages posted on the feeds of these so-called accountants look like:

“I’m in charge of sending out Mr. Butler’s personal checks. Please click link below and donate only 99 cents to cover postage fees. Thank you.”

The cybercrooks can make a lot of profit by running such scams. First of all, they can make money directly by tricking a large number of users into donating the 99 cents.

Furthermore, since victims have been asked to hand over their email addresses, the fraudsters can target them in other schemes, especially since they know that these individuals are likely to buy their stories.

In order to prevent the fake lottery winner accounts from being suspended, the scammers change their usernames, avatar and bio. Followers are lost in the process, but that doesn’t discourage the crooks from carrying on with their activities.

To make everything more legitimate-looking, on one of the fake accounts, the following message has been posted: “Account got hacked. Please follow and be patient. Thank you.”

If you come across such accounts, report them. Keep in mind that no one is going to hand out money on the internet, no matter how credible their story is.

Four Vulnerabilities Fixed with the Release of Adobe Flash Player 13.0.0.182