19-year-old been arrested of “HeartBleed” vulnerability. 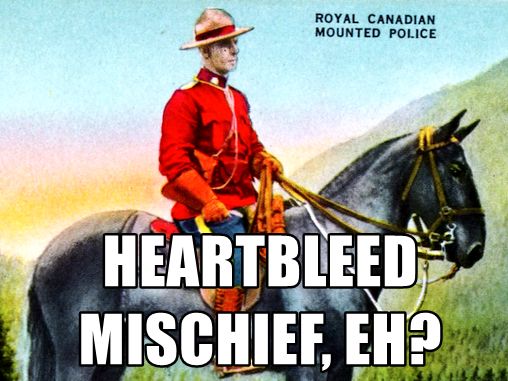 A 19-year-old computer science student has been arrested by the Royal Canadian Mounted Police (RCMP) and accused of stealing personal data by exploiting the “HeartBleed” vulnerability.

HeartBleed, the bug that left the Internet vulnerable, is a recently uncovered security flaw in the popular open-source encryption library(OpenSSL) which allows attackers to read memory of the server running vulnerable OpenSSL – means attacker can steal sensitive information.

Stephen Arthuro Solis-Reyes from London, Ontario, accused of exploiting HeartBleed bug to steal sensitive information from servers of the Canadian Revenue Agency(CRA), according to RCMP. – See more at: http://www.ehackingnews.com/2014/04/hacker-arrested-for-exploiting.html#sthash.YBKGimgW.dpuf

During the Police raid, his computer was seized by Canadian police. He is scheduled to appear in court in Ottawa on July 17.

The arrest came after CRA announced that someone exploited the HeartBleed bug to steal 900 Social Insurance numbers of taxpayers. The agency had shut down its site temporarily to prevent further attacks.

“The RCMP treated this breach of security as a high priority case and mobilized the necessary resources to resolve the matter as quickly as possible.” Assistant Commissioner Gilles Michaud said in a statement.

“Investigators from National Division, along with our counterparts in “O” Division have been working tirelessly over the last four days analyzing data, following leads, conducting interviews, obtaining and executing legal authorizations and liaising with our partners