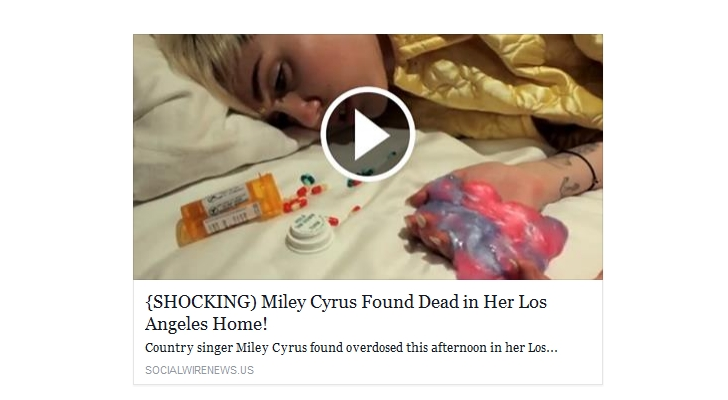 This is another attempt of survey scammers seeking new victims to fill their pockets by driving traffic to specifics websites and persuading victims to complete various online surveys in exchange for access to the fake news post.

According to online sources, the Facebook post entices potential victims to click on a link that would take them to a video relating death details of the star.

The message (via Urban Legends) under the video thumb reads, “{SHOCKING} Miley Cyrus Found Dead in Her Los Angeles Home! Country singer Miley Cyrus found overdosed this afternoon in her Los Angeles home,” and it lists SocialWireNews.us as the source.

The image used by the crooks is actually from a new music video of The Flaming Lips rock band, Blonde SuperFreak Steals the Magic Brain, featuring Miley Cyrus.

A simple whois lookup shows that the domain is hosted on a server in the US and that the registrant is one Brandon Belcher, a name that is associated with about 135 other domains. Belcher’s email and address could be used by cybercriminals to register various domains that are then used for scams such as this one.

However, fans should rest assured because she is alive and well. On her Facebook account, a fresh post promoting voting of her Wrecking Ball clip for video of the year at the 2014 MTV Video Music Awards popped up.

In order to ensure a larger audience exposed to the fake news, and thus increase the number of potential victims, the scammers first ask to spread the news by sharing it with friends, promising that this would allow access to the video.

But, as is always the case, the victim is not provided with the footage, first of all because it does not exist, and secondly, they have to help the scammers make money by completing one or more surveys.

Miley Cyrus is not at the first death hoax on Facebook, as previous fake news about the artist informed gullible fans about her committing suicide as a result of traumatic stress. A fake video was promoted then too, purporting to show a suicide note from the artist.