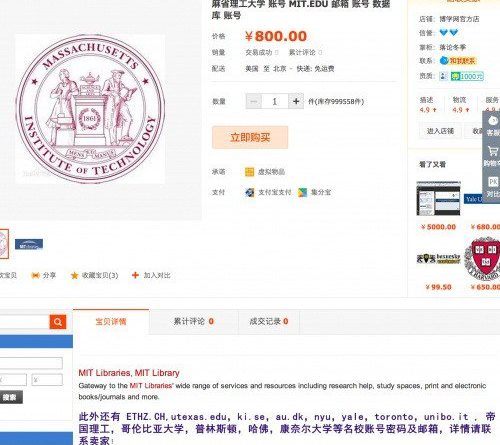 Recently, The email accounts from top universities across the world being sold on Taobao, the largest consumer-to-consumer (C2C) e-commerce platform in China.The accounts offer various benefits, which include registration to software developer programs, discounts from certain retailers, as well as access to academic databases.

The investigation began with a Chinese language search for “edu mailbox” in Taobao, which returned 99 results related to stolen university email accounts. The most expensive account was listed at ¥2400 RMB ($390.80 USD), while the cheapest was only ¥0.98 RMB ($0.16 USD).

19 educational institutions in the US were robbed of the accounts, among the owners being MIT, Stanford, Yale, Princeton, Harvard, Purdue, Columbia, Cornell, University of Chicago, and New York University.

“The sellers advertised that the email accounts are valid, accessible and active and also they mentioned about the benefits and features they provide”, says the report.

In other cases, the email accounts would offer significant student discounts at different retailers, such as Amazon, BestBuy, Apple and Dell.

Access to restricted content from a university was the third benefit touted by the sellers. This included tapping into resources from the library, as well as documentation and research studies.

“Some of the educational organizations have two-step verification feature set in place to protect against fraudulent email account log-ins”, says Palo Alto Networks