Someone is trying to take down the whole Internet of a country by launching massive distributed denial-of-service (DDoS) attacks using a botnet of insecure IoT devices which are infected by the the Mirai malware. Mirai is basically a massive IoT malware designed to scan for insecure IoT devices and enslaves them into a botnet network which is later used to launch DDoS attacks.

Recently a massive DDoS attack was launched against DNS provider Dyn, using this malware where over 100,000 infected-IoT devices participated in the attacks. Experts believe that the future DDoS attack could reach 10 Tbps, which is enough to take down the whole Internet in any nation state.

The root cause for all this would be: More insecurity, More vulnerable IoT devices, More Mirai bots.

A security researcher found about such incident which is happening from past one week where hackers are trying to take down the entire Internet of Liberia(a small African country) using another Mirai IoT botnet known as Botnet 14. 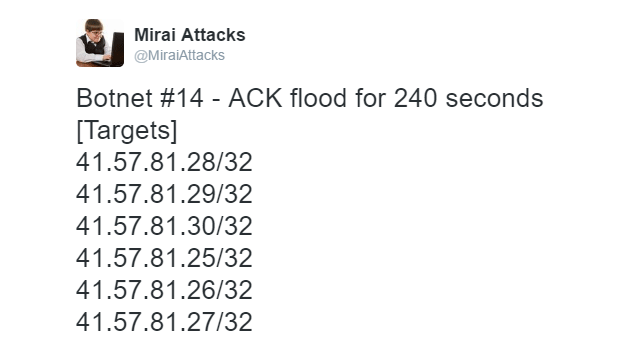 According to the security researcher Kevin Beaumont: Botnet 14 has begun launching DDoS attacks against the networks of “Lonestar Cell MTN”, the telecommunication company which provides the Internet to entire Liberia through a single entry point from undersea fiber cable.

This is extremely worrying because with this capacity not just Liberia, an attacker could disrupt the Internet services in all 23 countries in Europe and Africa which relies on the ACE fiber cable for their internet connectivity.