Google Paid About $3 Million To WhiteHat Hackers as Bug Bounty

The bug bounty program of Google has awarded hackers with $3million throughout 2016. This indicates us how important such programs are for the safety of everyone. Using the knowledge of these bug bounty results, Google has successfully managed to escape from backdoors in their systems and get hacked. The hackers put their minds to test and get paid for sending the bugs to the home company.

The company’s 2016 year in review reports puts the spotlight on bug bounty program, this insists that this is an important part of Google, especially since they are on a mission to keep their users safe. Over 350 researchers have contributed to this program in 2016, and they all come from all over the world, or, 59 countries to be more specific 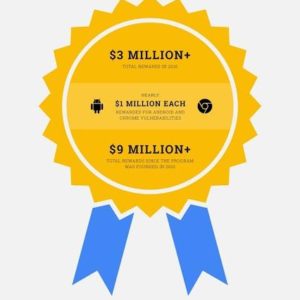 In total, they are over 1,000 bugs found in the Google’s services and apps reported back to the Google. If you are wondering how profitable it can be for the hackers to spend their time looking for the bugs in Google, you should know the highest payout given for a single vulnerability report was $100,000. Yes, you read that one right. Given the fact that normal bugs are not rewarded which heftily, that particular vulnerability must be quite an important one.

By comparison, in 2015, Google paid $2 million in the bug bounty program, so it’s a pretty large hike up last year’s $3 million. This is easily explained by the fact that Google increased the minimum payout last year, in some areas even by a 50%.

Google isn’t the only company that’s been known to have bug bounty programs. In fact, most companies do and it’s clear that it can be quite lucrative even when working as a white hat hacker. Many private researchers make quite a bit of money just by looking for bugs, without taking into account the extra they make in their day jobs.

Woman steals a man’s laptop look what happened next