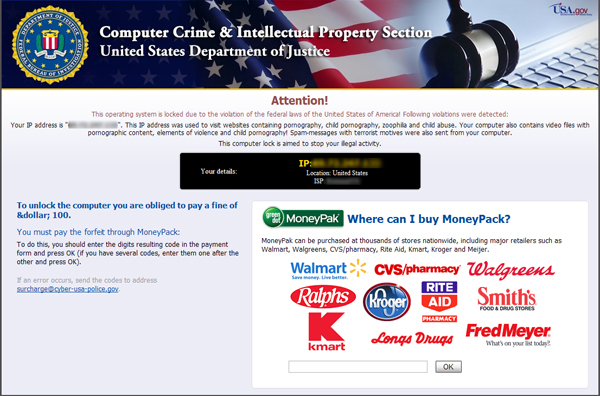 An engineer at Microsoft network team is currently facing federal charges for helping the hackers to launder money obtained from the victims of Reveton Ransomware. Raymond Uadiale, 41 is a US citizen who has been working for the Microsoft Seattle Branch since 2014.

Reveton installs itself on the PC without the users awareness, then suspends the computer. Counterfeit information from the FBI then pops up on the screen falsely alleging that the user has violated federal law and gives instructions on how to pay a “fine” to unlock their computer, according to the FBI. Victims who pay the fine, or ransom, are sometimes still shut out of their PC’s and data, prosecutors said.

The investigators are saying that Uadiale worked with an online hacker going by the moniker K!ING, who distributed the ransomware while Uadiale handled the payments. Reveton Ransomware locks the victims screens and asks the user to buy a voucher of GreenDot MoneyPak and enter it in the Reveton Screen Locker then K!NG would deposit the GreenDot MoneyPak payments into the debit cards Uadiale acquired under the name of Mike Roland. Then Uadiale would convert the money into Liberty Reserve Digital Currency and sends it his partner retaining 30% of the funds which was his cut for the hack.

Uadiale currently risks the maximum sentence of 20 years in prison and a fine up to $500,000 dollars and up to three years of supervised release. Currently, he is on bail by paying the court with $100,000 bond.