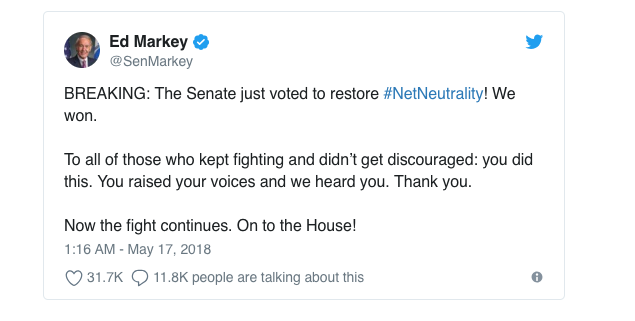 The US Senate has voted to disapprove the FCC’s recent decision replacing the 2015’s Net Neutrality rules which is a pleasant surprise for the internet advocates and internet users throughout the country however it is doubtful that the new rules would be undone. The Senate Joint Resolution of 52 members disapproved the FCC’s Restoring Internet Freedom to 2015’s Obama Era rules. The Congressional Review Act allows the Congress to undo the recently created rules by the federal agencies. Although the bill has to pass the house and must be signed by the president which many experts are saying that is unlikely.

Many Journalists are asking members of the Congress where they stand in the Net Neutrality war which will affect their upcoming election. “‘Do you support net neutrality?’ Every candidate in America is going to be asked that question,” said Senator Ed Markey (D-MA) at a press conference after the vote.

The day before the vote the Net Neutrality Resolution had the support of 50 members in the Congress but two more Republicans have joined the resolution to support the Obama Era rules making the final tally to 52-47. “We salute them for their courage,” said Senate minority leader Nancy Pelosi at the press conference.

“Today the United States Senate took a big step to fix the severe mess the FCC made when it rolled back net neutrality late last year,” she said in a report. “Today’s vote is a sign that the fight for internet freedom is far from over. I’ll keep raising a ruckus to support net neutrality and I hope others will too.”

Ajit Pai, The Chairman of FCC said that he was disappointed that Senate Democrats forced the resolution by a narrow margin, adding “But ultimately, I’m confident that their effort to reinstate heavy-handed government regulation of the Internet will fail.”