The news about Coinrail hacking hasn’t been faded yet, and here we see another blow to the Korean crypto market. This time, the South Korean crypto exchange Bithumb got hacked. Unlike Coinrail, Bithumb is among the most popular cryptocurrency exchanges in the world today. The hackers were successful in stealing tokens worth over $31.5 million.

Reportedly, another Korean crypto exchange faced a terrible hack this week. However, unlike Coinrail, it does not hold a minor position. Instead, it is the sixth largest cryptocurrency exchange in the world.

The attack on this South Korean crypto exchange Bithumb began on Tuesday, June 19, 2018, and continued until Wednesday, June 20, 2018. After the incident, Bithumb requested all its users stop making deposits until further notice. However, it didn’t mention anything regarding the hacking attempt in the tweet.

[Notice for the temporary suspension of the deposits]
Due to the increasing safety issues, we are changing our wallet system.
Please do not deposit until we notify.
*All deposits are not deposited into your wallet until all changes are completed.

After the news about the hacking incident surfaced online, Bithumb claimed to cover up the lost cryptocurrency from their side. However, they later deleted their tweet. They made a similar announcement on their website as well. Yet, they later archived that post too. Nonetheless, the archived post is still available online with the claim of compensation. 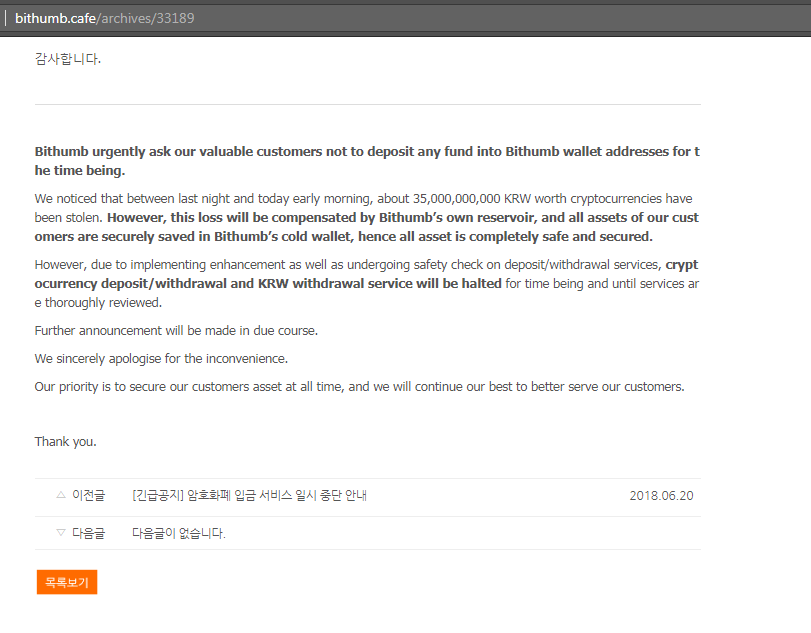 Coincidentally, the hack occurred just 4 days after Bithumb upgraded its security. On June 15th, Bithumb informed its users about the maintenance via Twitter.

[Notice for the restart of service]
We are transferring all of asset to the cold wallet to build up the security system and upgrade DB. Starting from 15:00 pm(KST), we will restart our services and notice again as soon as possible. Appreciate for your support.

This maintenance process took somewhat longer than expected which created some unrest among the users.

🚨 Apparently there was a hack attempt on @BithumbOfficial . News about whether or not it was successful has yet to be released. Will keep everyone updated as I hear trickles from the little birds. 🚨

However, the actual hacking of Bithumb’s hot wallet took place on June 19th, as informed by the resident officials from the Sentinel Protocol.

This Isn’t The First Time For The Korean Crypto Exchange

Although the present hacking attempt on Bithumb caused a massive loss of over $31.5 million worth of tokens (reportedly including Ripple), this is the not the first time for either the Korean crypto market nor for Bithumb. A few days ago, a relatively smaller crypto exchange Coinrail faced a similar cyber attack that caused a loss of roughly $40 million. Similarly, in December 2017, Youbit eventually shut down after being bankrupted by multiple hacking attacks.

Likewise, Bithumb themselves also faced such hacking attempt last year. The extent of loss in that cyber attack is, however, unknown.

We are not sure about the severity and originality of this hacking attempt yet. Interestingly, Bithumb had to pay around $28 million in lieu of taxes. This clearly appears an amount close to what they claim hacked – that too – right after they upgraded their security and moved their funds to cold wallets. People are therefore skeptical about this news.

Three days ago, June 17th, @BithumbOfficial upgraded their security system and transferred all of their assets to cold storage.

They were hacked on June 18th.

They owe 30 million in back taxes, then get hacked for 30 million. They didn’t want to pay out of their own pockets.

The Korea Internet & Security Agency (KISA) has stepped in to look into the hack. Whereas, the Korean Ministry of Science and Technology has also started investigations to unveil the mysteries. Some officers are also visiting the Bithumb headquarters located in Seoul to collect their records. Let’s see what the investigations reveal to us.

Let us know your views in the comments section.