Thinking someone is spying on you is one of the most unsettling feelings ever, I must say. While the victim may hate this, there are indeed people out there who gain pleasure in spying and tracking, whether for nefarious purposes or just for the fun of it.  Put your mind at ease by getting the WindowsSpyBlocker and block all spying and/or tracking.

This is a tool dedicated to blocking spying and tracking. The application is made using the Go programming language. This program captures and analyzes network traffic based on a bunch of tools. From its name, I presume we can all guess which operating system it runs on. Windows 7 SP1, Windows8 and Windows 10 are the options.

How do you get WindowsSpyBlocker?

How to use it?

It seems like not much of an installation takes place, because the console comes up as soon after permission to run is granted.

The first thing to do is to turn on your internet connection, if it isn’t turned on already. An error shows up if not. 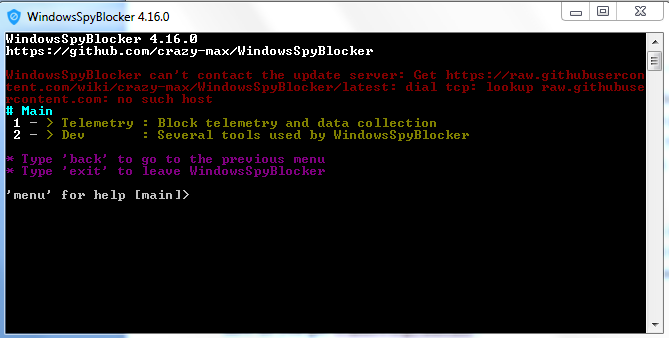 With connection handled, it’s easy to figure it out. The commands are laid out on the console with descriptions of what each one does.

The main block features “Telemetry” and “Dev” blocks which can be launched by entering 1 and 2 respectively. These commands bring about more sub-commands. Looking at the description which appears tells the purpose of everything.

Basically, results gotten vary as per command entered. The many commands can’t be shown in action. Here is what it could look like after the “Test the internet connection” option listed above: 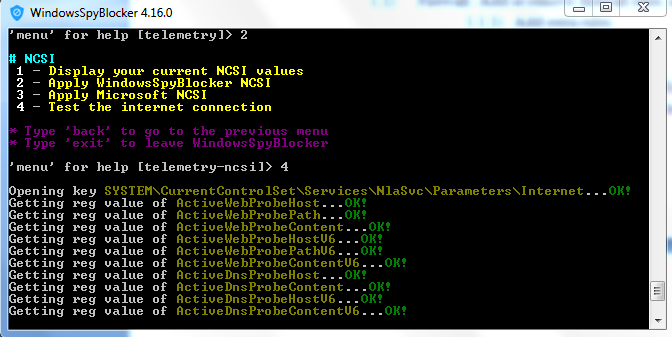 WindowsSpyBlocker is a fantastic, easy to use tool with an excellent motive in helping avoid you being traced and speed upon.  As a result we have decided to give this tool a very respectable rating of 4/5 bunnies.

We have a  networking hacking course that is of a similar level to OSCP, get an exclusive  95% discount HERE