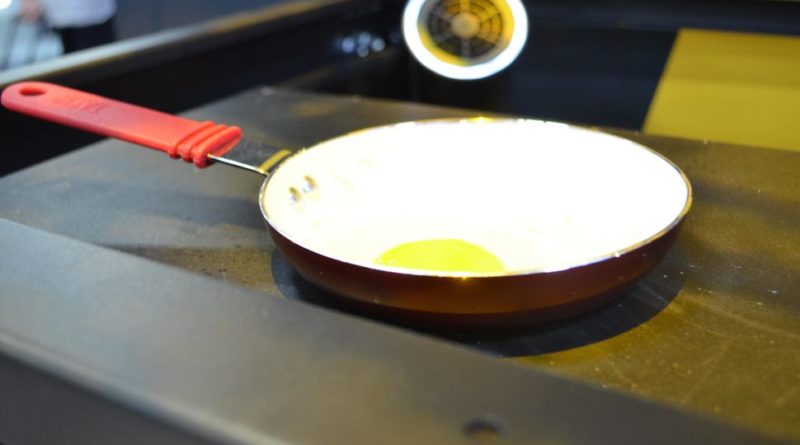 Researchers Showed You Can Fry An Egg On A Cryptojacked Router

Researchers at Symantec demonstrated how dangerously hot a router can become when attacked by cryptomining malware. They demonstrated this experiment at Black Hat USA which is being held at the Mandalay Bay Convention Center, Las Vegas. After amusing the attendees of the event showing how one can fry an egg on a cryptojacked router, they thought they would share this with the world too. Brian Varner from Symantec described it all in his blog.

“It took about 10 minutes to get an egg to sizzle on top of a dangerously hot piece of hardware.”

The researchers certainly had a serious agenda behind this fun-filled experiment. Today, the attackers hunted for devices to use for cryptomining, whether it is a router or any other device capable of infection. The infected devices, therefore, have to work beyond their capacity, resulting in a rise in the device’s temperature. Many people may not take cryptojacking that seriously. So, the researchers decided to demonstrate how badly it can affect your hardware!.

“We were on hand to show one of the more dramatic consequences of being cryptojacked. What was important to demonstrate with our simulation was to visually show why everyone should take cryptojacking seriously. While most users may be unaware about the heat that a device can generate through cryptomining, the temperatures can be painfully hot to the touch.”

Varner explains that the temperature of their generic router reached around 150 °F (or 65.55 °C). That’s indeed sufficient for cooking meat, poultry, and fish, besides eggs.

“Cryptojacking affects both consumers and enterprises, and our simulation was meant to educate everyone on the dangers associated with this emerging threat. Attackers are using your electricity and resources without you knowing and they’re profiting from it.”

“Crypto-Fried Egg” – Did Anybody Taste It?

Well, if you are wondering what happened to that egg fried on a cryptojacked router, then here we end the suspense. ALFRED NG of CNET, who was also there at the conference, tried that egg. At first, he broke the news of such an experiment in his tweet.

The most important story from Black Hat incoming: I ate an egg cooked on a cryptojacked router pic.twitter.com/R4xZEGclRD

Then, in another tweet, he uploaded his brief video of eating that egg. Later he shared his thoughts in a blog.

You can see my "I regret this immediately" face here pic.twitter.com/lJGjUnUh4n

Talking about how he felt after eating the egg, he said,

“Unfortunately, I really only tasted the extra virgin olive oil cooking spray that’d been fizzled onto the pan. The egg was runny, and the yolk quickly spilled out over the white. I finished the meal in two bites. I give this router-cooked egg one out of five stars.”

Although it’s a fun-filled experiment, thanks to both sources that gave us food for thought!. Cryptojacking is rising exponentially these days. While most people think of it as an apparently “harmless” cyber attack, it could have grave consequences for your hardware.

The attacker can potentially wear out your resources to mine a few cents worth of crypto. Obviously, with the present algorithmic difficulty levels, they cannot become instantly rich by cryptomining. Yet, they actually cost you a fortune in power and degradation of hardware. It’s high time to become wary of such attacks. Make sure you employ all security measures to protect yourself from cryptojacking and other cyber attacks.

Let us know if there’s anything you would prefer to fry on a hacked router.