Coinhive Bows Out of The Market

Coinhive has announced it will be closing for business on the 8th March 2019.

As a crypto miner, Coinhive is popular for the way it uses individuals’ CPU to give businesses opportunities to generate value from websites. Its ways are controversial as for some it is genius. This is because it deals with the problem of overusing power when mining. However, 0thers criticise its lack of ethics towards users, as they are not told about this. Additionally, the concept of relying on users’ power to help generate more money for the interest of business raises ethical concerns.

Coinhive, an open door for hackers

Coinhive mines Monero currency so when users visit a site with the Coinhive script, it will use their CPU to crypto-mine. This, however, is also an opportunity for hackers to hijack a user’s CPU. Web extensions are especially great platforms for them to use. It comes at a time where the increasing vulnerabilities in web extensions were highlighted by various researchers such as Dolière Francis Somé. With Coinhive hackers can deploy script injections. Further advantages of Coinhive for hackers is the ability to remain anonymous. This ability is from encryption surrounding transactions as well as remaining undetectable by anti-virus tools, due to its javascript qualities.

Instances where hackers benefited from Coinhive include the Information Comissioners Office (ICO). Its website shut down momentarily this time last year after a Monero mining malware infected users whilst they visited the site. Hackers also targeted other governmental websites across the UK and the USA. Hackers exploited the web browser plugin, Browesalouds Text Help application, by changing the hosted script files to add the malware. 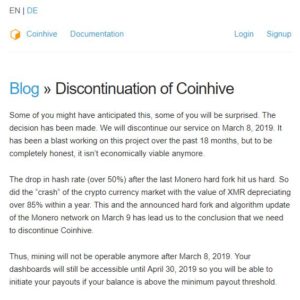 Despite this, many organisations used Coinhive and it led the way for companies alike to provide similar services.

Responses to close of business

Coinhives announcement did not come as much of a shock to people. Coinhive stated the primary reason for the closure was down to the general market slump in the cryptocurrency market. T 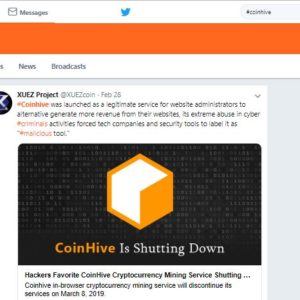 his is, particularly with Monero currency. People took to Twitter with some commenting on the constant abuse of the device by hackers while others commented on the ending of an era.