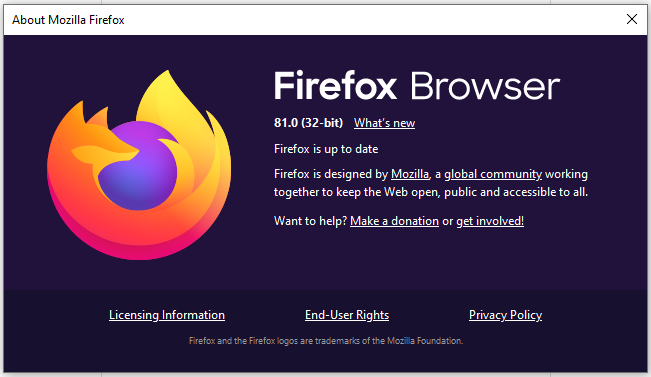 Mozilla Firefox browser’s latest version is out. With Firefox 81, Mozilla has released numerous bug fixes including patches for code-execution vulnerabilities.

Specifically, they addressed as much as six different vulnerabilities, including some high-severity flaws too.

For instance, CVE-2020-15673 and CVE-2020-15674, as explained in their advisory, were memory corruption vulnerabilities. The former also affected the Firefox ESR 78.2. These high severity flaws could allow arbitrary code execution upon exploitation.

Whereas, the third high-severity bug included a use-after-free flaw, CVE-2020-15675, affecting the WebGL component. Describing this vulnerability, the advisory reads,

When processing surfaces, the lifetime may outlive a persistent buffer leading to memory corruption and a potentially exploitable crash.

This bug first caught the attention of Brian Carpenter via the ASAN Nightly project who then reported it to Mozilla. Sharing his thoughts with Threatpost, Carpenter told that the bug was not easy to exploit, yet, wasn’t impossible too.

Mozilla has fixed three moderate-severity flaws as well with Firefox 81. All of these affected different components and could lead to different consequences.

Firefox sometimes ran the onload handler for SVG elements that the DOM sanitizer decided to remove, resulting in JavaScript being executed after pasting attacker-controlled data into a contenteditable element.

The second vulnerability, CVE-2020-15677, was a download origin spoofing flaw. It could allow an attacker to impersonate a site displayed in the download file dialog.

When recursing through graphical layers while scrolling, an iterator may have become invalid, resulting in a potential use-after-free. This occurs because the function APZCTreeManager::ComputeClippedCompositionBounds did not follow iterator invalidation rules.

Mozilla has released the fixes with the latest Firefox browser version. Hence, now, the users should ensure updating their devices to patch the bugs.