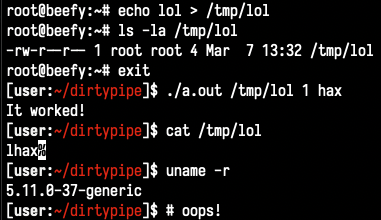 According to the details shared in a blog post, security researcher, Max Kellermann, discovered a strange bug affecting Linux systems. Named as “Dirty Pipe,” the vulnerability typically allows overwriting of data in read-only files, thus leading to elevated privileges on Linux. In the worst exploitation scenario, such privileges may also include root access as the attacker could inject malicious codes.

Briefly, the vulnerability, CVE-2022-0847, caught the researcher’s attention in 2021, when, following a customer complaint, he observed a corrupt log file on the server that triggered gzip to report a CRC error when trying to compress it.

Upon analyzing the matter for some time, the researcher eventually deduced it to be a kernel vulnerability.

elaborating on it further, the researcher stated exploiting the bug required five steps.

1. Create a pipe.
2. Fill the pipe with arbitrary data (to set the PIPE_BUF_FLAG_CAN_MERGE flag in all ring entries).
3. Drain the pipe (leaving the flag set in all struct pipe_buffer instances on the struct pipe_inode_info ring).
4. Splice data from the target file (opened with O_RDONLY) into the pipe from just before the target offset.
5. Write arbitrary data into the pipe; this data will overwrite the cached file page instead of creating a new anonymous struct pipe_buffer because PIPE_BUF_FLAG_CAN_MERGE is set.

Kellermann has also shared the PoC in his post.

As observed, the bug affects Linux Kernel versions 5.8 and later.