Facebook data scientist Carlos Diuk breaks down what happens in the days leading up to (and immediately following) two Facebook users beginning a relationship.As couples become couples, Facebook data scientist Carlos Diuk writes, the two people enter a period of courtship, during which timeline posts increase. After the couple makes it official, their posts on each others’ walls decrease—presumably because the happy two are spending more time together.

This is how Facebooks sees when u fall in love :-

Even though there are fewer messages being sent between star-crossed lovers the longer they’re in a relationship, Diuk says ” the content of the interactions gets sweeter and more positive.” By using “statistical methods to automatically analyze a set of aggregated, anonymized timeline interactions[…] we counted the proportion of words expressing positive emotions (like ‘love’, ‘nice’, ‘happy’, etc.) minus the proportion of words expressing negative ones (like ‘hate’, ‘hurt’, ‘bad’, etc.).”

“We observe a general increase [in sentiment] after the relationship’s ‘day 0,’ with a dramatic increase in days 0 and 1!” he says. Here’s a chart describing that change: 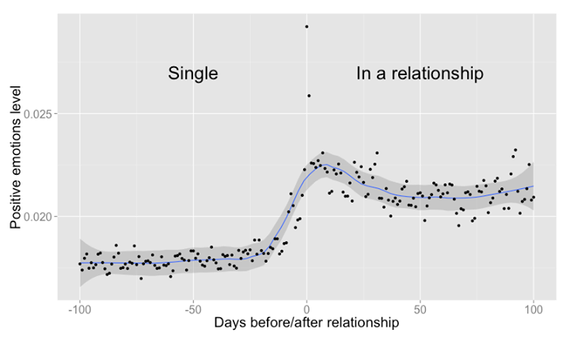 Facebook concluded Facebook helps couple,first they start talking then they fall in love and then say fewer things to each other,but those things tends to be positive.The question of breakups  will be addressed tomorrow so stay tuned,says Facebook.

3 Challenges of Penetration Testing and How to...

4 Common Hacks That Are Prevented With a...

How to Receive A Fax through Web Browser