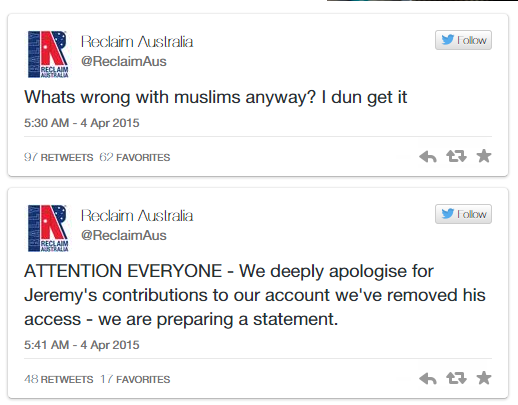 The Twitter account of Reclaim Australia, an anti-Islamic group was hacked by a protester who posted messages about drugs. The hacker is misusing the account and announced an”official statement” saying the rallies that had been planned for Saturday morning had been cancelled. The hacker is using a twitter account with the name of Jeremy.

Jeremy also posted tweets in which he said “whats wrong with muslims anyway I dun get it”, “In the car reading stuff wots xenophobia? help me out” and “I like vegemite on toast, it’s great in a toastie after a big night who gives a shit if it’s halal what even the f… is that”. Look at the images below as a proof. He then apologised in a post on the behalf of Reclaim Australia saying Jeremy’s access had been cut and followed that up with an official statement that the rallies had been cancelled.

The account was not hacked for fun. It was timed to be when rallies were taking place in capital cities around the country which attracted a lot of attention on social media the #ReclaimAustralia hashtag was the highest trending in the country on Saturday morning.

On the Facebook page of ReclaimAustralia, they said: “It has been brought to our attention that people claiming to be representing Reclaim Australia Rallies have been making unauthorised statements on various media outlets. In some cases people, unknown to Reclaim Management, have made statements of which do not represent the consensus of Reclaim Australia Rallies at all.”

Fairfax Media tried to contact ReclaimAustralia but got no response.

The next day, the ReclaimAustralia rally went ahead even in pouring rain in Martin Place, Sydney, which was then interrupted by a protester who ran onto the stage and grabbed the mic, and started  shouting to the crowd they should be “ashamed” of themselves. The woman put her fingers up at the crowd before the police took the woman with them. No charges were made.

Around 200 people held the protest with the slogan on their placards and on their T-Shirts and the rallies were held around the whole country. Some of the slogans were as follows :-

During the rallies and in between speeches, all the people sung the Patriotic songs and the national anthem.

Now according to the tweets of the ReclaimAustraila(see the image below), its Clear that their account is no longer under control of the hacker and hope so that it would again not happen in the future.