3 Ways to Record Your Screen in Linux Machine

Whether you want to demonstrate how to run a piece of software, or giving a Linux newcomer a visual guide of the operating system, you’ll get the best results from a screen recording tool.

What You Should Look for in a Screen Recorder

Before proceeding, let’s take a look at the typical functions of a desktop screen recorder.

For example, it should be able to capture either the entire desktop, or a single app window. Additionally, you can expect to be able to set the recording to a particular resolution and video file type.

Do you need to appear in the video? If so, some screen recorder tools offer the ability to detect video from your computer’s webcam, and audio from the mic.

With a straightforward UI and a nice collection of features, Vokoscreen is yet another screen recording option for Linux. Capable of recording and streaming your desktop, you will need a top-end gaming rig to get the benefit of streaming in HD. 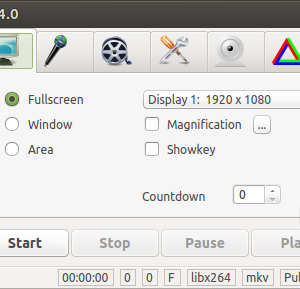 Available via GitHub, Vokoscreen can also be installed via the command line by adding a PPA.

Once launched, Vokoscreen is ready for action pretty much right away. You can capture from the entire desktop, a window, area, or a specified magnification around the pointer. This is useful for close-up video captures.

Video and audio codecs can be selected, while audio drivers, video format and frame rate can also be changed to suit. You’ve also have ability to include footage from your webcam in your screen recording. Easy to use buttons let you record, stop, pause and play the screen capture. There’s even a sharing option, but this is limited to email. Naturally, you’ll need to keep an eye on the file size here!

Vokoscreen is a handy screen recording tool, easy to set up and use.

Available from the Ubuntu repository, with support for ARM and PowerPC devices as well as 32-bit and 64-bit, Kazam is an efficient desktop video capture tool. Capable of recording full screen, all desktop screens, a single window, and areas of the desktop, Kazam can also capture audio from the speakers and your mic. 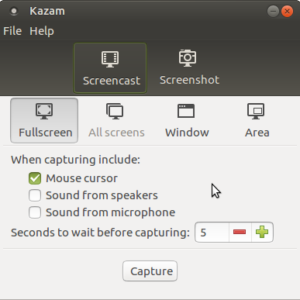 Install via your software manager, or:

Once you’ve recorded your desktop activity, you can stop via the system tray. You’ll be prompted to Save for later, or edit with your usual video editing software.

With the ability to select audio devices, video formats and even take screenshots, Kazam is a great Linux screen recorder for beginners.

It may call itself “simple”, but this app actually has more features than some of the others listed here. Upon launching, you’ll be presented with a single screen with plenty of options. These include the expected full screen recording, recording a selection, following the cursor, and also the option to record GL for video game captures. 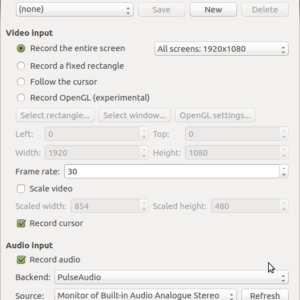 To save time, you can also create profiles suited to different screen capture tasks. Audio can also be recorded, and video type changed via the subsequent screens found via the Continue button. Once you’re ready, hit Start Recording — by default, the resulting video will be saved in your Home directory.

Again, if you’re using an Ubuntu-based distro, you’ll need to install a PPA repository before you can install Simple Screen Recorder.

(Instructions for installing to other distros can be found on the developer’s website.)

Simple Screen Recorder is certainly not simple, but it is straightforward and offers some useful features.

Time To Delete Your Yahoo Account And Set It On Fire

How To Protect Yourself From Malicious Websites While...

5 Arguments in favor of Working with Cloud...