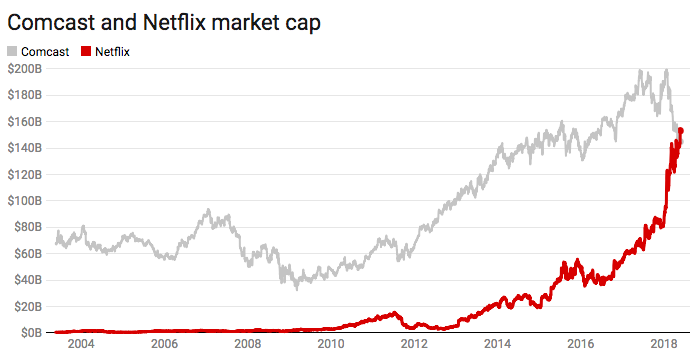 Netflix’s market value has increased to over $150 Billion yesterday and it is currently worth more than Comcast who are one of the largest US cable companies. It would seem people are cutting the cords and moving to streaming services.

More than 300,000 users have ended their Comcast subscription while Netflix has gained more than 7 million subscribers in the first quarter of 2018. Comcasts’ Internet business however has grown to include more than 26 million subscribers, while its number of pay TV users has declined to 22 million — a difference of four million households. Last quarter, Comcast added 379,000 high-speed Internet subscribers while losing 96,000 video customers.

While Comcast and Netflix have two different business models the common content in these platforms gets overlapped which results in some direct and indirect competition. Comcast also owns NBC and Dreamworks and it is currently planning on acquiring Fox’s movie and Hulu.

Comcast is currently planning to acquire it with a bid greater than Disney’s bid for obtaining Fox movie studios. Fox has already turned down the bid from Comcast last year in favour of selling the company to Disney. Some of the internal documents suggest that Comcast’s bid is 16% higher than Disney’s bid.

Comcast is currently intending to make another offer at Fox, a statement from Fox will ultimately decide that what will happen with the company.

At present Netflix is growing internationally by acquiring a lot of subscribers with its Internet platform,