A terrifying online scam has shaken up dozens of Australians the past few days. Scammers posted secretly recorded videos of their victims after many Australian webcams were hacked. These videos were supposedly posted on the YouTube account of the scam organization ‘Macpatchers’. Macpatchers claimed to be a tech support company with a legitimate toll-free number too.

A supposed tech support company, named Macpatchers, hacked numerous Australian webcams as they accessed their customers’ computers without their knowledge. Around 69 videos were uploaded on Macpatchers’ official YouTube account, where the customers appeared to be endorsing their services. This awkward filming incident has terrified the victims. They had no idea that their webcams were on.

The supposed technicians charged huge fees to solve non-existent tech problems. They accessed the customer’s computer to scour for false issues. At this point where they accessing their webcams and began filming the victims. The scammers even accessed sensitive details of many of the individuals, such as their bank account credentials. Prof. Geoff Sussman of Monash University is one such victim. The scammers fleeced him for $1,590 after accessing his computer as he contacted them for help in downloading Adobe software.

“They say, ‘look, we need to check why this is. The only way we can do that is to in fact access your computer,” says Prof. Sussman.

Afterward, they asked the Professor to read some text appearing on his PC screen to confirm he’s happy with the services. He read out the text having no idea about the recording.

“I had no idea I was being filmed, and I certainly had no idea they were using me to promote themselves.”

Similarly, the scammers successfully received various, apparently genuine, endorsements from the users. Until of course the victims found out, but by this time, it was already too late!

How Would They Have Accessed The Web Cams and Private Information?

Whilst we can’t say for sure how the company would have accessed the web cams and personal information of the victims, we can make a pretty educated guess that the victims would have been coerced into downloading some sort of remote access tool (RAT). Once the victim would allow the connection, gaining access to the web cam and running scripts in the background would be trivial for anyone with a little computer knowledge.

All We Got To Know About Macpatchers

Macpatchers claims to be a tech support company. They allegedly provide technical assistance to people looking for help with various issues such as software installation, or support for their Yahoo, Gmail, and Hotmail accounts. They even have a legitimate Australian toll free number on their website to con people. Furthermore, the layout of their site appeared to be an official support service.

Once someone calls the number, the person hears from the so-called technicians from Macpatchers.

Although Macpatchers appears to be based in Australia, their technicians all talk with Indian accents. Some even provide their Indian names too.

After the news came to light from ABC, Macpatchers’ so-called official website has disappeared from the internet. Their support and marketing pages are down and their website has no content available.

However, the scam is not over. LHN did a quick Google search for the toll-free number and found various alleged tech support websites, all displaying the same number. It shows that the scammers have just shut down one site, and are continuing their work through other fake aliases. 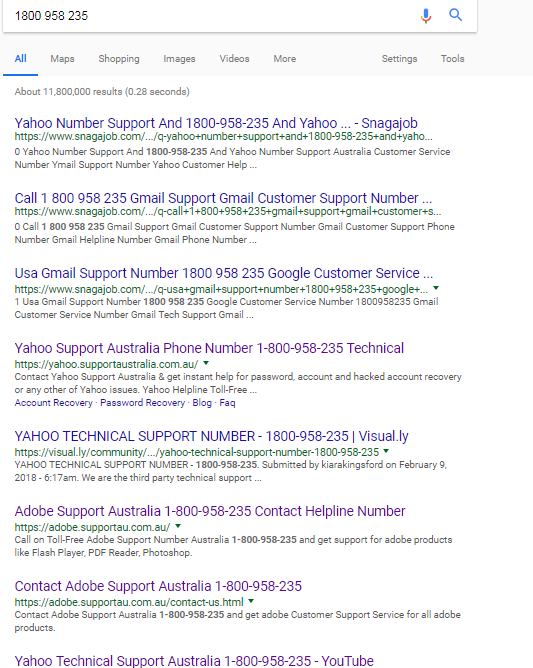 Their active sites now claim to provide support for Yahoo, Gmail, and Adobe. (The layout for the website providing support services for Adobe now looks different).

Interestingly, we found another website which looks typically designed for New Zealand. With a .nz domain, the website once again appears legit with a clear address and contact number.

Nonetheless, they offer services similar to what the other scam website was offering. This is what makes it suspicious – similar name with similar services. (Shall we expect it to be a different one? We doubt!)

We shall update you as we get to know more about these scammers. Until then, we request all our readers to be wary of these types of scams. Though you may also find some other toll free numbers associated with the name ‘Macpatchers’, think twice before contacting such services for support.

Feel free to contact us via the “Contact Us” menu at the top of the page if you have any concerns.

Microsoft Confirms It Is Acquiring GitHub