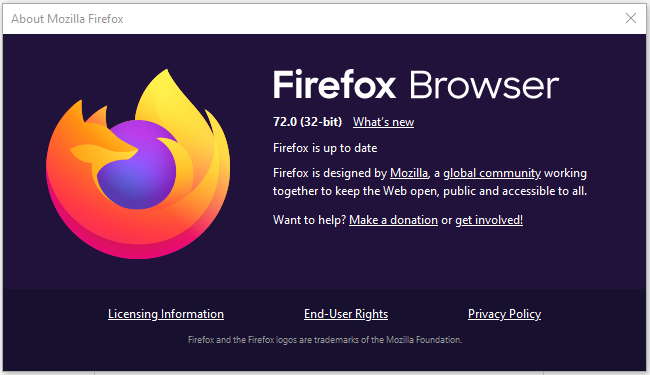 Mozilla has rolled-out its Firefox 72 browser version this week. The new version brings enhanced tracking protection for users as it blocks fingerprinters by default. Plus, Mozilla has also fixed numerous security flaws with the latest release.

Mozilla has released the latest version of its Firefox browser with even better privacy features. With Firefox 72, Mozilla has launched fingerprinter blocking as a default setting.

This is the practice of identifying a user by the unique characteristics of their browser and device. A fingerprinting script might collect the user’s screen size, browser and operating system type, the fonts the user has installed, and other device properties—all to build a unique “fingerprint” that differentiates one user’s browser from another.

Fingerprinting is particularly risky for users’ privacy because it can even work with private browsing. Fingerprinting does not rely on cookies. Rather it tracks the devices at large.

While Mozilla already introduced fingerprinting blocking as a custom privacy setting, with Firefox 72, it is available by default. It means the new browser protects every user from fingerprinters without having the user to meddle with settings.

Regarding how this will work, Mozilla explained,

Firefox 72 protects users against fingerprinting by blocking all third-party requests to companies that are known to participate in fingerprinting. This prevents those parties from being able to inspect properties of a user’s device using JavaScript.

Mozilla also fixed numerous security vulnerabilities with Firefox 72, as revealed from their advisory.

Alongside security improvements, Mozilla has also rolled-out various other features as well. This includes hiding browser notification prompts, picture-in-picture for Mac and Linux, and other changes.