Epiq, a global law firm, has emerged as the latest victim of a cybersecurity incident. As revealed, Epiq Global suffered a ransomware attack in the previous week. Following the incident, the company’s website went down.

The news surfaced online after the company issued a public statement. As stated there, the firm detected some suspicious activity on its systems on February 29, 2020. Upon investigating the matter, they could identify the incidence as a ransomware attack.

On February 29, we detected unauthorized activity on our systems, which has been confirmed as a ransomware attack.

Though at present, their statement does not include much information about how the attack happened, and its possible impact. Nor have they mentioned or hinted about the kind of ransomware that hit them.

However, TechCrunch has shared some details which they obtained from an unnamed source. As per the leaked details, the ransomware affected the ‘entire fleet of computers’ across the 80 offices of the firm globally. Most of the systems were running old versions of Windows, and hence, ‘nothing was up to date’.

The company has internally instructed its staff not to share any details with their clients. They have also advised staff to refrain from coming to the offices without approval, and to keep their devices disconnected from the office network.

Site Down ‘For Maintenance’

In their statement, Epiq Global has assured that they are working hard for the resolution of the matter. They also mentioned about pulling their systems offline ‘to contain the threat’. However, their website simply displays a note hinting towards maintenance. 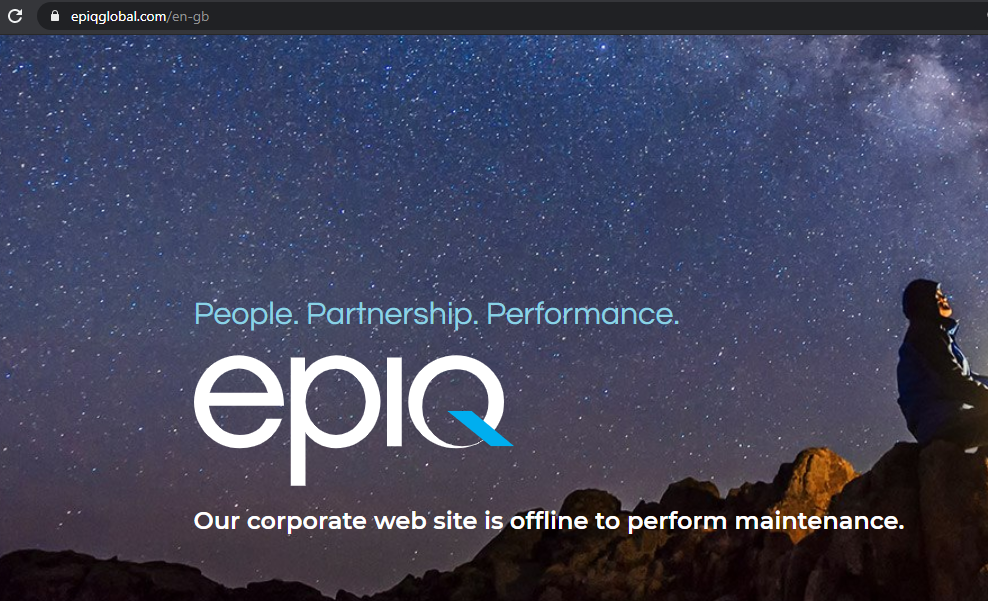 Nonetheless, they pledge to bring their systems online quickly as they continue to work with professionals and law enforcement.

Our technical team is working closely with world class third-party experts to address this matter, and bring our systems back online in a secure manner, as quickly as possible.
Federal law enforcement authorities have also been informed and are involved in the investigation.

They have also assured that the incident did not negatively affect any data.

At this time there is no evidence of any unauthorized transfer or misuse or exfiltration of any data in our possession.

Yet, Catherine Ostheimer, Epiq spokesperson, did not specifically answer any queries put forward by TechCrunch. So, we have to wait until the firm issues any further details officially. It is also not clear about how and when will its service be back online.

Tricks to Catch a Website Hack Before it Hits your SEO