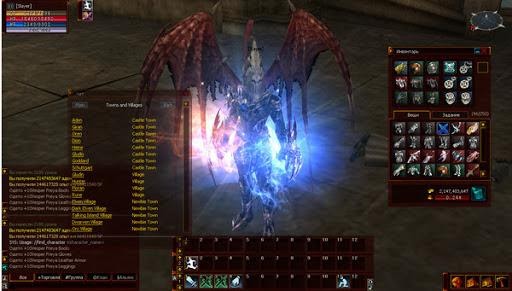 There are several ways to create a data flow needed for MMORPG but usually, it requires a server and a client. The client is a program that you use on your PC, and the server, like L2 Classic, is a different machine (or machines) that you connect to via the Internet when you want to play.

The client consists of everything you need to play: a map of the game, mob models, etc. Everything is stored on your PC and you need to download only ones. Your PC uses algorithms to project information in the client files on your monitor, and that enables you to play the game.

The sound and graphics of the game are processed on your PC. The client also has a user interface or controllers through which you interact with the game. Some clients allow the player to change UI depending on his needs, for example, you might be able to change the size of icons, choose buttons to specific actions, etc. Also, the client transfers data like your location, what direction you are going, and what you are doing.

A lot of different information comes from the server and the PC needs a large amount of power to be able to process it all. If the computer is rather old it might not be able to process it all and the player will experience difficulties especially in areas with a large number of people. Because of that many people believe that PC specifications must be higher than the recommended minimum.

The server has a lot of responsibilities too. It needs the client to do some things but generally the server:

Actually, when you hear “MMO server” it’s not exactly correct. One game almost always requires a lot more than one server. Most games have different servers and every single one of them is a different world with unique guilds and communities usually different too. Players from different servers can not communicate with each other.

Some servers designed for specific purposes. One server can be focused on PvP battles and another only on PvE. While it does not change the game in a huge way it might have some interesting features.

MMORPG requires other servers as well:

In essence, the gameplay is an interaction between the client and the server. Let’s see what happens next.