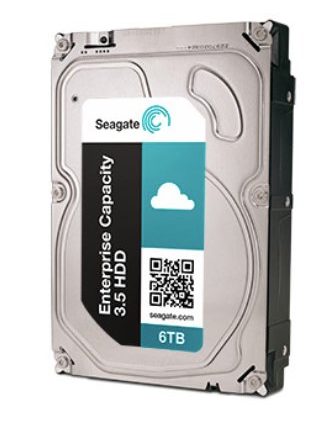 Seagate sub LaCie has pre-announced a 6TB near line disk drive from its parent and it doesn’t appear to use the slow write shingled magnetic recording technology.

LaCie’s news came out with the NAB event in Las Vegas, which opened on Friday. There are details of the drive on Seagate’s website, although the drive has not been announced and is not yet available.

The Enterprise Capacity drive has these features:

Seagate said it doesn’t yet need to use the lighter gas, which reduces friction and heat. The company used the same perpendicular magnetic recording technology that it has on previous models, but it was able to increase areal density from 831 bits per square inch to 1,000.

“We didn’t have to use helium to get to this capacity, and it’s 25% faster than their helium drive,” said Barbara Craig, a marketing manager with Seagate. “You can rest assured, when we need it [helium] we’ll use it.”

The enterprise drive also has what Craig described as a “humidity sensor” that will allow it to continue functioning in humid environments.

The new drive also comes in 2TB, 4TB and 5TB capacities and with either 12Gbps SAS or 6Gbps SATA connectivity.

As with its past enterprise drives, Seagate’s new drive is self-encrypting with the company’s Instant Secure Erase, which overwrites data multiple times for easy drive disposal or repurposing. The drive is also FIPS SED certified.

Seagate’s “Super Parity” error correction firmware with RAID rebuild functionality is located on the drive’s SAS controller, which improves data rebuild times after a drive error. Craig said a drive’s data can be rebuilt “in hours instead of days.”

“This is the fastest-growing segment in the enterprise space,” Craig said. “People today are still trying to use desktop drives for near-line storage applications.”

While Seagate did not release pricing, as it sells most of its enterprise-class drives to storage array makers, Craig did say the drive will be the same price per gigabyte as the previous 4TB capacity model.