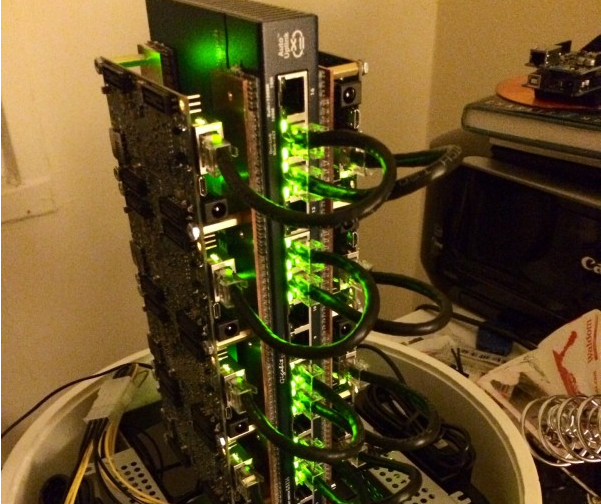 How one person managed to build a supercomputer from Parallella boards – While you can build your own Linux supercomputer using commercial off-the-shelf (COTS) products, even with just Raspberry Pi boards , these don’t natively support massively parallel computing — the cornerstone of modern supercomputing. That’s where Adapteva, with its $99 Parallella parallel processing single-board supercomputer comes in.

Andreas Olofsson explained the need for such a board:

It is now possible to buy Parallella computers from Adapteva’s website. The credit-card sized Parallella is powered by Adapteva’s breakthrough 16- and 64-core Epiphany multicore processors.

The first model comes with the following hardware features:

These initial boards use Ubuntu Linux. Support for other operating systems will depend on community involvement, however there have been a number of projects that incoorporate Debian onto these boards.

So how easy is it to build a Supercomputer from these boards? Twitter engineer Brian Guarraci decided to find out just that. He calls his creation Parallac, and it’s an homage to supercomputers. So how does the system perform? Guarraci says that Parallac has achieved around 208 GFLOPs. To put that in perspective, it’s roughly 200 times more than the first Cray-2 supercomputer could manage back in 1985. Parallac may not be the fastest supercomputer in the world today, but it’s an amazing example of just how far we’ve come in a relatively short time.

Soon you’ll be able to build your very own Parallac, see his website at http://www.parallac.org/

In the spirit of this article I created a hommage to LISP by writing an interpreter that runs on the Parrallella 16. The source code can be downloaded from github – https://github.com/drewvid/parallella-lisp