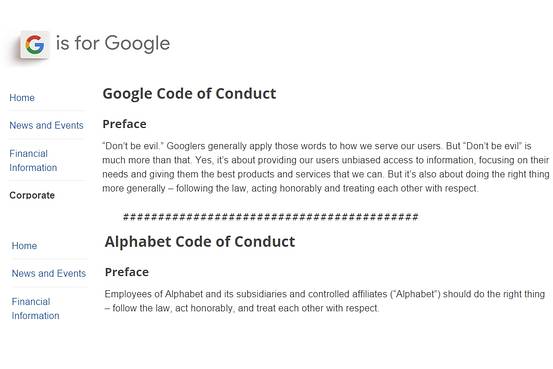 Google used to have an unofficial motto called ‘Don’t be Evil’ in the code of conduct that Google gives to its employees. The phrase was removed sometime in late April according to the archives in the Wayback Machine show.

The “Don’t Be Evil” motto has been in the company’s code of conduct from the beginning but when the founder of the company restructured it by making Alphabet the parent company it has slightly adjusted the motto to “Do The Right Thing” even though the company had retained the original motto until the past several weeks. The “Don’t Be Evil” phrase has been so deeply integrated that it is used for Google Shuttles WiFi (A transport system Google uses to ferry its employees).

The Old Google Code of Conduct:

“Don’t be evil.” Googlers generally apply those words to how we serve our users. But “Don’t be evil” is much more than that. Yes, it’s about providing our users unbiased access to information, focusing on their needs and giving them the best products and services that we can. But it’s also about doing the right thing more generally – following the law, acting honorably, and treating co-workers with courtesy and respect.’

‘The Google Code of Conduct is one of the ways we put Google’s values into practice. It’s built around the recognition that everything we do in connection with our work at Google will be, and should be, measured against the highest possible standards of ethical business conduct. We set the bar that high for practical as well as aspirational reasons: Our commitment to the highest standards helps us hire great people, build great products, and attract loyal users. Respect for our users, for the opportunity, and for each other are foundational to our success, and are something we need to support every day.’

Despite the huge change in the Google Code of Conduct, it is saying that it hasn’t been updated since April 5th, 2018. The new version of Google Code of Conduct is still retaining one reference to the company’s unofficial motto where the final line of the document still says ‘Don’t Be Evil and if you see something that you think that isn’t right please speak up!’.