Tplmap is a python tool that can find code injection and Server Side Templates Injection (SSTI) vulnerabilities by using sandbox escape techniques. The tool is capable of utilising a SSTI in a number of template engines to gain access to the target file system or operating system. Some of the supported template engines include PHP (code eval), Ruby (code eval), JaveScript (code eval), Python (code eval), ERB, Jinja2, and Tornado. The tool can execute blind injections against these template engines with capability of executing remote commands.

Tplmap can be installed by cloning the tool from github repository by using the following github link.

After successful installation, change the directory path to the tplmap setup files to launch tplmap.py.

Testing the Vulnerabilities in Web Applications

The following command can be used to test for vulnerable parameters in the target url.

Once the command is executed, the tool tests the target url against a number of plugins to find code injection opportunity.

If a vulnerability is found, the tool outputs the details about the possible injection points in the target. These include the GET parameter value (whether id or name), template Engine (e.g Tornado), OS (e.g Linux), and injection technique (e.g render, blind). 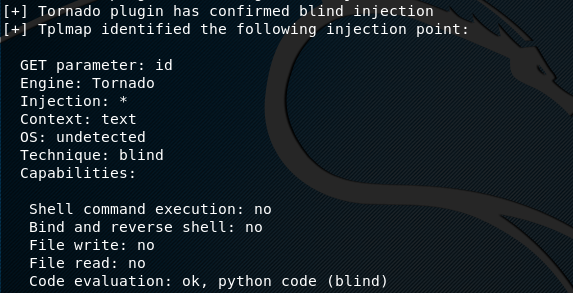 Tplmap not only scans the vulnerabilities but the same tool provides the option to exploit the target too. The exploitation feature is helpful for penetration testing, as a result we will be awarding this tool a rating of 4 out of 5 bunnies.

Over 70 Universities Targeted by Iranian Hackers