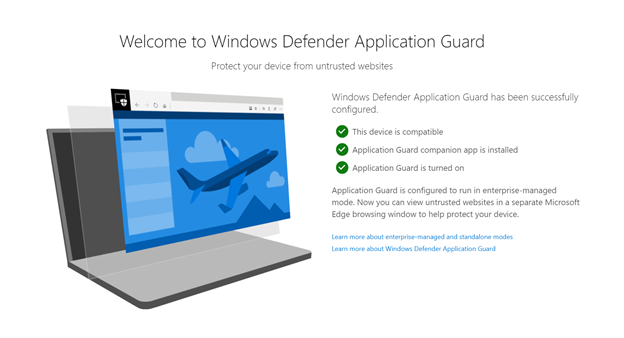 As announced in a recent blog post, Microsoft launched a dedicated Application Guard extension for Mozilla Firefox and Google Chrome browsers as well. Microsoft made this announcement alongside the disclosure of Windows 10 Insider Preview Build 18358 (19H1).

Allegedly, the users of Mozilla Firefox and Google Chrome can now avail the browser security features of Windows Defender with a dedicated browser extension. To download the extension,

After the download completes, the users may continue with the configuration procedure according to instructions displayed. Once done, they can simply activate the extension by clicking on the icon displayed in the menu bar of the browser window.

For now, the extension for Chrome and Firefox is available to Windows Insiders only. However, it will soon be available for all.

Microsoft first launched the Application Guard extension for Microsoft Edge browser. The extension extended the capability of Windows Defender to protect the users against browser-based attacks in real-time. As described by Microsoft,

“Designed for Windows 10 and Microsoft Edge, Application Guard helps to isolate enterprise-defined untrusted sites, protecting your company while your employees browse the Internet… If an employee goes to an untrusted site through either Microsoft Edge or Internet Explorer, Microsoft Edge opens the site in an isolated Hyper-V-enabled container, which is separate from the host operating system.”

As a result of the isolation of a suspicious website, the isolated container becomes anonymous. Hence, the user stays protected against the malicious site.