While using encrypted messaging apps, some users may think their conversations and media files exchanged during the chats remained end-to-end-encrypted. However, researchers have recently made a contrary finding. As discovered, a media file jacking vulnerability threatens the security of most Android apps, including WhatsApp and Telegram.

Researchers from Symantec have shared a detailed report regarding a media file jacking flaw threatening Android apps. According to their findings, hackers can easily manipulate media files transferred over WhatsApp, Telegram, and other applications. Neither the sender nor the receiving user would ever notice this manipulation. The attack does however only work under certain conditions.

Talking about the exploit in their blog post, Symantec researchers elaborated that hackers can manipulate incoming files on an infected device even before the recipient user actually sees them. This is possible because of a certain time-lapse during the writing of media files on the disk and the following UI prompt.

It stems from the lapse in time between when media files received through the apps are written to the disk, and when they are loaded in the apps’ chat user interface (UI) for users to consume. This critical time lapse presents an opportunity for malicious actors to intervene and manipulate media files without the user’s knowledge. 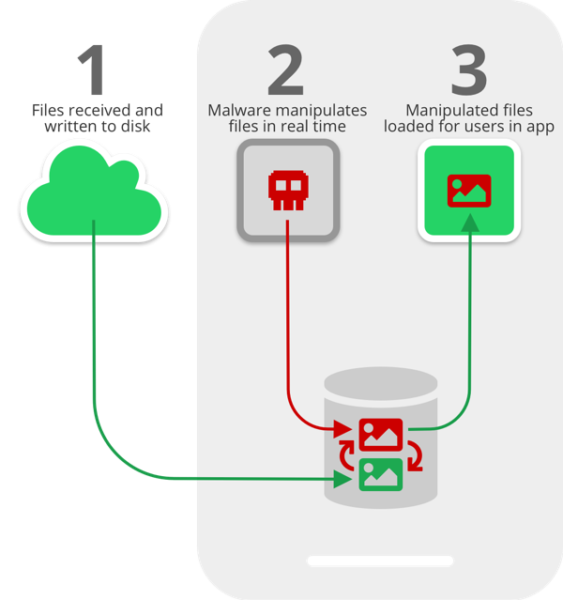 Moreover, the researchers fear that such attacks can also contribute to spreading fake news. This can even target Telegram news channels, affecting the credibility of the channel and targeting the receivers with fake news.

To the media file jacking vulnerability, WhatsApp users are more vulnerable since the app has the option of storing media to device’s gallery by default. Whereas, in the case of Telegram, it is an optional feature requiring manual activation by a user.

In either case, the easiest way for regular Android users to mitigate this attack is to stop using external storage.In the case of Telegram, they should not choose Gallery to store media files.To deactivate this option, go to Settings -> Chat Settings -> Save to Gallery.

Whereas, in case of WhatsApp, they should turn this option off via Settings -> Chats -> Media Visibility.

As for more promising solutions, the researchers advise developers to adopt the following measures.

In 2018, Check Point Research also reported about a similar flaw that they called Man-in-the-Disk attack. The MiTD attack was also possible because of the apps’ access to the device’s external storage.