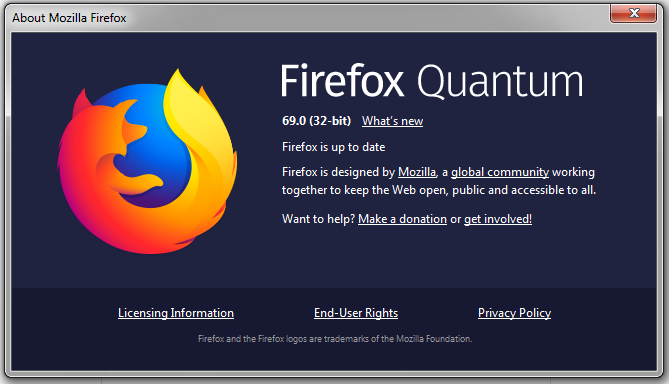 This week, Mozilla has rolled out its latest Firefox browser version. With Firefox 69, Mozilla aimed at killing Flash entirely (like Chrome 76) and bringing enhanced protection against web trackers. It also released fixes for numerous serious security vulnerabilities in the browser.

With Firefox 69 released on September 3, 2019, Mozilla has made some major changes. The first of these changes is the abandoning of Adobe Flash. While Mozilla was already working on a plan to get rid of Flash, they announced killing off the add-on by September.

Conforming the previous announcement, Mozilla has disabled the Flash Player by default in Firefox 69. It will now seek permission from users to activate Flash content on a website when present.

Regarding the consequence of this change towards user privacy, Mozilla stated in the release notes,

With the deprecation of Adobe Flash Player, there is no longer a need to identify users on 32-bit version of the Firefox browser on 64-bit version operating systems reducing user agent fingerprinting factors providing greater level of privacy to our users as well as improving the experience of downloading other apps.

Mozilla has also jazzed-up the tracking protection settings for the browser. The default settings with Firefox 69 now blocks third-party cookies and cryptominers.

In addition, Firefox 69 also brings a dedicated feature to block the automatic playing of videos.

Alongside browser feature updates, Mozilla has also released patches for multiple security flaws with Firefox 69. These include a critical vulnerability as well CVE-2019-11751, regarding which, Mozilla stated in its advisory,

Logging-related command line parameters are not properly sanitized when Firefox is launched by another program, such as when a user clicks on malicious links in a chat application. This can be used to write a log file to an arbitrary location such as the Windows ‘Startup’ folder.