Once again, Google’s Play Store has made it into the news following the existence of apps that overcharge users for basic subscriptions. These include some apps that offered pretty basic features like a calculator or QR code scanner.

Reportedly, SophosLabs has discovered some mobile applications preying on users. As elaborated in their report, the researchers found some two dozen Android apps overcharging users for basic functionality that can be found for free on the store.

According to the researchers, the 24 apps would offer trial versions of otherwise premium subscriptions to users, however the main issue was the shiftiness of the apps that would make it extremely difficult to end a trial subscription.

When the trial expires, if the user who downloads and installs one of these apps hasn’t both uninstalled the application and informed the developer that they do not wish to continue to use the app, the app developer charges the user.

Such apps even included those offering features for which free alternative apps already exist, such as QR code scanner, photo-editing features, or calculator. Moreover, they wouldn’t just cost a few bucks, rather the charges would exceed up to hundreds of dollars or euros, which is quite unusual.

Since the apps didn’t exhibit any malicious behavior, the researchers coined the term ‘fleeceware’ for them.

Google Removed Some Of The ‘Fleeceware’ Apps

Upon finding the ‘fleeceware’ apps, the researchers initially shared the list of 15 of such applications with Google. Following their report, Google removed 14 of those 15 apps.

Later, Sophos shared another 9 names with Google for further action. However, these apps still exist on the Play Store. Below we share the list of those apps (as revealed by the researchers) for our readers. 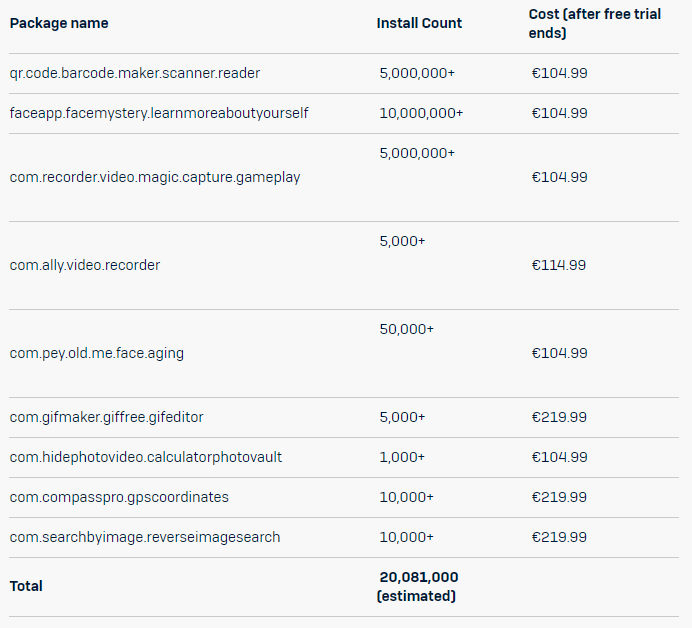 Let’s see if Google takes any action regarding these apps too. Moreover, we shall also look forward to any actions from Google in an attempt to address this undue leverage by app developers.

Do share with us your thoughts regarding this news in the comments.