Aren’t hackers are anything but ethical?: Some spend their days penetrating business’ systems, stealing information, holding it to ransom, and consequently damaging a victims’ reputation.

At least, that’s what we’re made to believe from the media.

Of course, there are ethical hackers out there. In fact, for many businesses, ethical hacking is one of thebest defenses against these cybercriminals.

1. Ethical hacking trains you to develop the hacker mindset.

The difference lies in what happens after they penetrate the security of a computer network or database.

Instead of stealing the data and exploiting it for their personal gain, ethical hackers report these vulnerable areas to the company’s IT team.

The IT team can then address and heighten the security in these areas and keep their systems and data safe from potential attacks.

In this digital age, companies transact businesses on their websites and store sensitive data in the cloud daily.

Although they are cost-effective, these practices have also made businesses more vulnerable to cybercriminals than ever before.

There’s also a growing concern among consumers about how businesses collect and use their personal information.

Even government agencies are vulnerable. According to former CIA Director Leon Panetta, the biggest threat the country faces today is a “cyberattack that could paralyze the nation.”

Already, there’s an increase in the number of online searches on topics relating to cybersecurity. 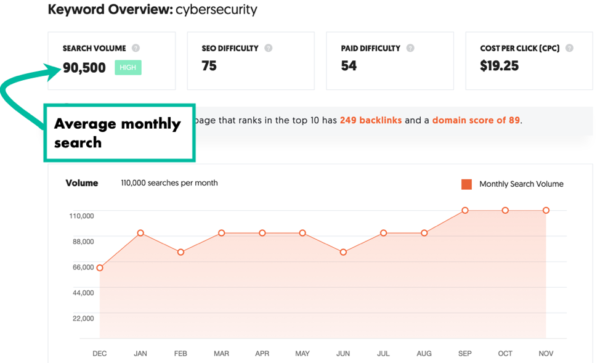 Also, the jobs related to ethical hacking like penetration testers and test analysts have been growing exponentially.

In fact, it’s estimated that there are currently 1.5 million cybersecurity job openings worldwide.

In the US, about 350,000 jobs are waiting to be filled by ethical hackers.

And the demand continues to grow with experts predicting it would increase to 36.5% by 2022.

3. Businesses are willing to pay generously.

Ethical hackers are aware of how much businesses need their skills and expertise to keep their systems and data safe and secure.

So, following the economic principle of supply and demand, it’s no surprise why ethical hackers can ask for a higher salary than other software programmers and developers.

You can search on job sites like Indeed, and you’ll see how much businesses are willing to pay to hire an ethical hacker. 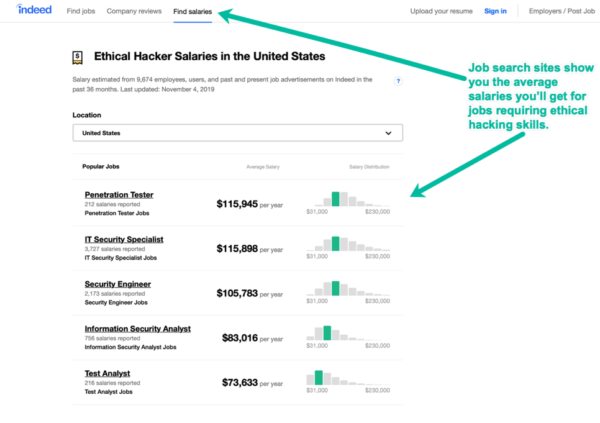 So even if the salary that these businesses pay to hire an ethical hacker is substantial, they consider it as a worthy investment to make.

4. Earn a certification recognized around the world.

There’s no shortage in the number of schools and institutions offering certifications on various technical skills you’ll need to be a professional software developer.

The problem here is that many of these certifications are only recognized in the country where it’s issued.

And because technology has been evolving at a rapid pace, you’ll always have to keep on updating your certification so that you can stay competitive.

That’s not the case when you decide to take an ethical hacking course.

In addition to learning the fundamental ethical hacking and penetration testing skills, you’ll also get hands-on experience in applying these theories in practice.

Once you complete the course, you can now apply for a Certified Ethical Hacker (CEH) certification.

This certification is critical for three reasons:

First, it demonstrates your skills in scanning, testing, hacking, and protecting computer network security, no matter how complex it may be.

Second, many companies like Google now require Technical Solution Engineers and other IT personnel to have this certification before they can apply. 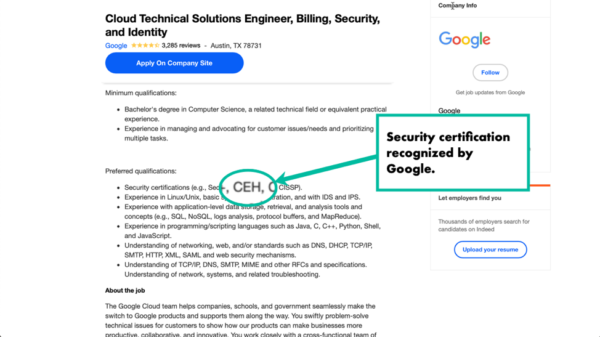 Lastly, the CEH certification is one of the few security certifications that’s recognized by companies all over the world.

This not only allows you to work in some of the top companies where you live, but also allows you to apply for jobs in other countries as well.

5. Ethical hacking is an exciting career.

But once you settle into your job and fall into a routine, the excitement begins to dissipate.

Eventually, you begin to see the job that you were so excited about becoming a burden. You start feeling stuck and dissatisfied.

Soon, you’ll be looking at greener pastures elsewhere. And the same vicious cycle starts all over.

That all changes the moment you decide to become an ethical hacker.

Your position and the responsibilities you do daily stay the same. However, the work that you’ll be doing will be anything but routine.

That’s because black hat hackers are continuously improving their skills and coming up with new ways to penetrate and compromise computer systems and networks.

That’s the only way they’ll succeed.

As an ethical hacker, you’ll need to anticipate these steps they’ll make.

On top of that, you’ll need to find how to make the network system and data even safer and more secure.

This means that you can never become complacent. Nor can you afford not to improve yourself continuously.

You’ll need to keep testing and trying things out so that you can help the company you’re working to stay ahead of cybercriminals.

It’s this game of cybersecurity chess that makes being an ethical hacker exciting and fulfilling.

Ethical hackers are the heroes in the cybersecurity war.

The digital space has become a haven for exponential growth and progress.

It’s also a battleground where organizations, businesses, and government agencies fight to keep their systems and data safe from black hat hackers and cybercriminals.

And like in any battle, you need to know not only who your enemy is, but also how they operate.

That’s why the world needs ethical hackers. They’re a special breed of IT specialists that can look into the cybercriminal’s mind and anticipate their next move.

The war is on, and it’s raging. Now the question is: Which side are you going to take?

7 Must-have skills for a successful career in...

What Can Go Wrong With an IT Disaster...

Best ways to block cyberattacks in your business

AWS IAM Vs Azure: Which Is More Secure?

Malvertising: What It Is and How to Stay...

3 Reasons Why IP Data Can Be Crucial...