Let’s consider a scenario: You’re at a public location (let’s say a cafe) while necessarily authenticated into some super important service (let’s say online banking). But what if–after you’ve carefully authenticated–someone snatch-and-runs with your laptop?

Software engineer and Linux sysadmin, Michael Altfield, has come up with an solution to protect stolen device data. He has developed a security cable that he calls ‘BusKill’ that can secure your data in case of laptop theft.

The cable is designed to combat should a thief snatch-and-run a users laptop. Altfield came up with an idea that will instantly shut down the system the moment someone steals it. He created a simple $20 cable that protects the laptop.

For successful operation, one end of the cable is attached to the user, the other end is connected with the laptop. The moment it is disconnected from the device, the action triggers a udev script. This script can further trigger a system shut down, or entirely wipe the data (as directed by the user).

Altfield has also shared a brief video demonstrating how BusKill will work.

Altfield has detailed everything in his blog post about the setting up of the cable and the software.

In brief, creating BusKill requires you to have,

In all, it will cost you around $20 to obtain these components. 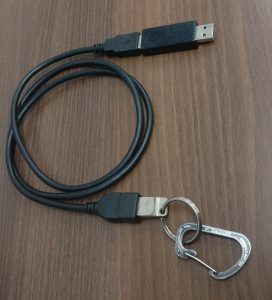 Then, set up the rule while inserting this ID_MODEL. The subsequent action can be anything from displaying screen saver to wiping off the data. For instance, to set up a screen saver,

Whereas, the following will trigger system shut down upon USB removal.