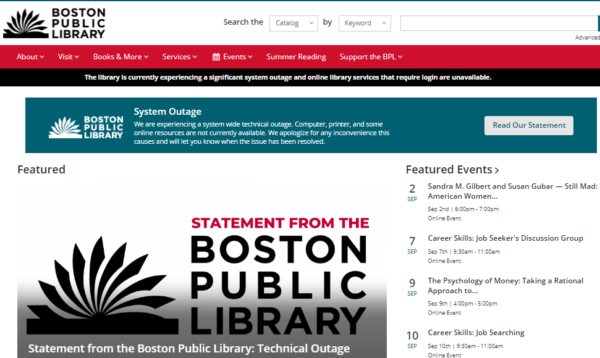 One of the oldest and the largest libraries in the US, the Boston Public Library, has suffered a cyber attack. The library is currently experiencing an outage of its online services in the wake of the attack.

According to the security notice from the Boston Public Library (BPL), the service is facing technical outages after the cyber attack. Alongside sharing a detailed statement, the library has also posted a short message on its website stating online outages. It reads,

The library is currently experiencing a significant system outage and online library services that require login are unavailable.

As elaborated in the statement, the library faced the attack on August 25, 2021, following which it experienced a system-wide outage. The incident affected its public computer and printing services alongside pulling its online services offline.

Consequently, the library had to shut down the affected systems to contain the attack.

Following the incident, BPL coordinated with the law enforcement authorities regarding the investigations. Besides, they manage to continue the services as they can.

The Library’s IT department is working on restoring all technology services, and in the meantime, all locations will remain open, patrons will still be able to check out books, and some online services remain operational. This is an ongoing situation and the library will update patrons and staff about services and impacts on its website.

BPL has found no evidence of impact on “sensitive employee or patron data” during the incident.

While the library hasn’t presently described details about the incident, the way it was executed hints at a ransomware attack. Though, BPL assured to share more details soon.

Boston Public Library is a huge municipal public library system that has also attained the status of Boston Landmark. The library’s collection includes over 23.7 million items that include some rare books and manuscripts as well.