How do I install this leet speak tool Cr3dOv3r?

Cr3dOv3r is compatible with Windows, Linux, and MacOS. The tool requires Python 2.x or above to operate. Cr3dOv3r can be installed by cloning the package from github repository using the following command.

Enough of this baloney, lets Get Started with Cr3dOv3r!

Cr3dOv3r can be set into action using the following command:

The above command starts the tool and displays the available options that can be set as arguments in the commands.

Let’s find out if our targeted email address is misused or the associated password has appeared in any leaks. The task can be performed using the following command.

The -q argument represents quiet mode (no banner) in the scanning process. The tool looks for the use of the provided email address on different websites and displays the results as shown in the following screenshot.

If there is no leak found publically, the tool asks for credentials (passwords) to perform a login attempt (registration check) for different well-known websites, this could be particularly useful for Red team engagements where credentials have been found elsewhere. If credentials are used somewhere else, they are displayed in the results as shown in the following screenshot. 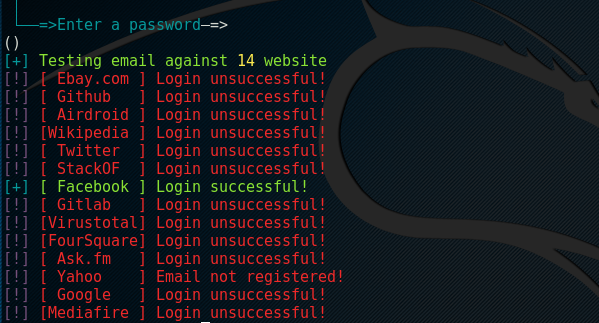 Cr3dOv3r is helpful in discovering the misuse of email addresses or leakage of the credentials. The tool not only finds the web applications where the targeted email address is used, but also looks for the plaintext passwords and whether they can be utilized within other accounts.

Cr3dOv3r really is an awesome tool that takes lots of the donkey work out of red team exercises when looking for password reuse vulnerabilities, the tool requires minimal installation and pretty much works out the box. As a result we have decided to give this tool an awesome rating of 4 out of 5 bunnies.