Every reconnaissance phase has a standard checklist that is to be followed. If you’ve ever conducted or been a part of target recon you’ve most likely encountered, these steps:

Today, we’ll be focusing on the the 2nd and 3rd contenders, with an awesome utility written by OJ, in Golang. A weird choice in my opinion but a wonderful product none the less.

Gobuster is a URI and Subdomain brute forcing tool, which in the simplest terms possible means that the tools makes a request asking for a File or a Directory on the server, depending on the server’s response it determines whether the file or directory exists or not.

This can yield some serious results in the form of sensitive file exposure, which in turn can widen your target scope for both recon and exploitation. Now that I have done a wonderful job of selling you the idea to learn Gobuster, let’s install it on our machines.

There are two ways you can obtain Gobuster, through the APT repository or compiling it manually through Git. I highly recommend the second approach if you’re planing to punish you for your past sins.

To install gobuster simply write the following on your terminal

Here through our first line of code, we’re updating our systems so that we have the latest stable build of all the dependencies that your system may require for installing Gobuster.

Then we simply fetch Gobuster from the APT repositories.

If you want to get your hands dirty you can try the manual compilation approach.The first thing we need to do is get the clone the Git repository onto our local machine.

This command will download all the files from Git onto your machine. As previously mentioned Gobuster is written in Golang which means we’ll need to acquire it as well.

The following command will download, install and setup the Golang environment on your system, if it isn’t already done. Once completed, navigate to the Gobuster directory and begin the compilation process.

This command will fetch all the dependencies and build a binary for you which you can execute. To add this to your Golang Path so that you can call it from anywhere in your shell, use the following command

Nice, now that we are finally done installing Gobuster let’s get to using it.

To start the most basic bruteforce on your target, you can try the following flags

We’re calling the Gobuster binary and supplying the following flags, -u is for supplying the URL of our target and -w is for giving the wordlist gobuster can use to traverse through the directories and files. 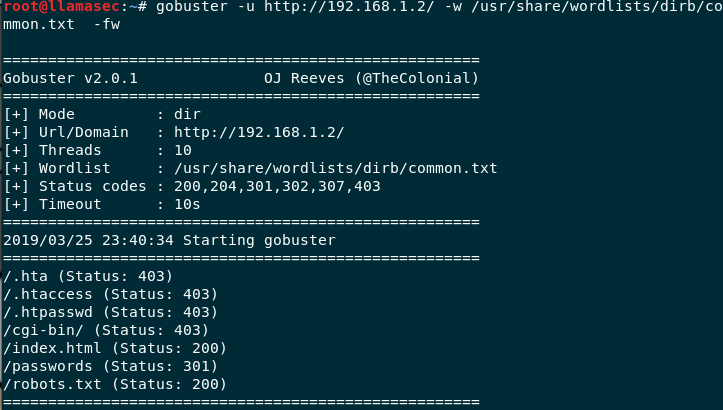 You can clearly see that we find a lot of interesting stuff by a simple URI bruteforce.

It’s neat that Gobuster provides us with such a friendly, human readable output, but in the long run you’d most likely want to save it in a file. To do that we can use the following flag

The -o flag will generate an output file called output.txt, but you can obviously name it whatever you want.

Gobuster is an essential tool for performing Recon, the fact that it’s written in Go does damage it’s extensibility cause there aren’t a lot of popular wrappers around Golang for different programming languages to interact with it, but the batteries that do come included inside the box are good enough for most. Gobuster ships with Subdomain enumeration as well, and if you’re dealing with only a single target, it’s good enough, but as soon as your scope reaches past 3 or 4 targets, you may want to opt for something like Massdns. Overall I would rate it 4 as it provides a light weight CLI interface for interacting and is not a heavy and clunky directory enumerator like Dirbuster.