WhatsApp has recently updated its privacy policy. While many users might have randomly agreed to it, some users would still have opted for the “Not Now” option as they wished to learn more about it or look for alternatives. Here’s what you should know before deciding to continue using WhatsApp or not.

Facebook has gifted its customers with quite an unpleasant (and unsurprising) new year present beginning 2021.

On January 4, 2021, Facebook announced (and implemented) a major update to the privacy policy of WhatsApp. Here’s what the changes are as mentioned in their key updates. 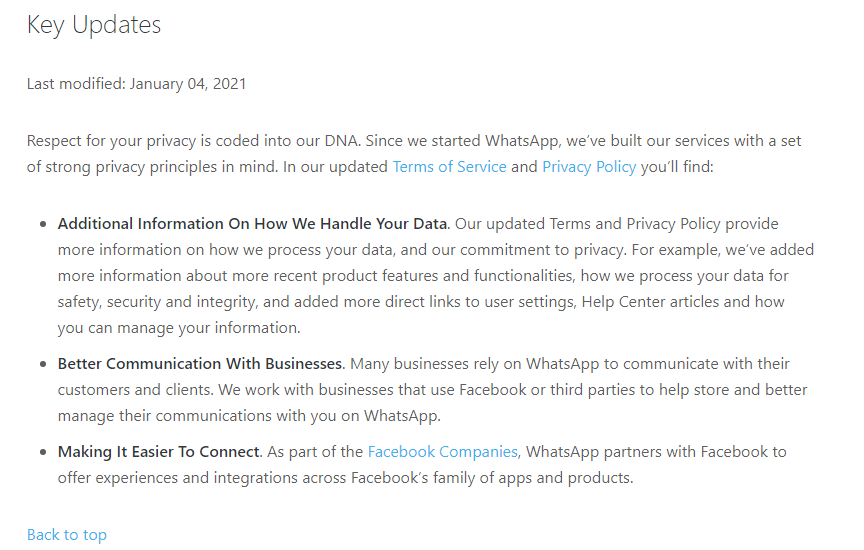 Though, these changes did not appear as clearly in the notification users would have agreed to (or not).

While the words may still not appear haunting, a quick look at the details elaborated in their complete (updated) Privacy Policy and Terms of Service reveal something else.

Briefly, Facebook will now collect more data from users via WhatsApp. This is evident from the changes visible upon comparing the old Privacy Policy with the updated one.

As per the updates, users must agree to let WhatsApp collect all the information for service improvements. Also, users should agree to let Facebook share this data with its other companies and Facebook products, including Onavo, CrowdTangle, and Oculus.

It means even if you do not use Facebook, Messenger, or any other Facebook service besides WhatsApp, your data won’t remain limited to WhatsApp only.

As regards the type of information collected (and shared) via WhatsApp, the firm states in the FAQ section,

The information we share with the other Facebook Companies. includes your account registration information (such as your phone number), transaction data, service-related information, information on how you interact with others (including businesses) when using our Services, mobile device information, your IP address, and may include other information identified in the Privacy Policy section entitled ‘Information We Collect’ or obtained upon notice to you or based on your consent.

Facebook’s Hints From The Past About WhatsApp

While the recent move may appear a surprising decision from Facebook, it isn’t actually a new thing.

Facebook already made numerous attempts in the past to integrate WhatsApp with its main Facebook product. One such move happened in 2016 when users had to explicitly disallow Facebook and WhatsApp integration.

Then, in 2019, once again, Facebook’s owner Mark Zuckerberg expressed the opinion to merge Facebook Messenger, Instagram, and WhatsApp.

Though it didn’t explicitly hit WhatsApp’s security (or user base), things appeared to have started to change.

For now, Facebook has asked all WhatsApp users to agree or postpone agreeing to the updated terms.

However, this liberty is applicable only until February 8, 2021, after which, users must agree to the changes. Anyone not agreeing to the updates should be ready to quit using WhatsApp.

It’s because Facebook won’t allow the users to continue using WhatsApp without accepting the updated terms. And, WhatsApp will automatically delete inactive accounts after 120 days of inactivity.

So, the next move is pretty clear for all users. At the moment, Facebook hasn’t introduced any change or compromise to WhatsApp’s end-to-end encryption. But they have certainly taken a step that haunts privacy freaks.

Hence, anyone concerned about Facebook’s data collection practices has only one option left – quit WhatsApp.

Perhaps, that’s what many existing WhatsApp users have done recently as Signal experienced a surge in its userbase. The sudden influx even caused a temporary disruption in its verification feature that it fixed quickly.

Nonetheless, this switching of apps may be specifically useful for those who do not use any other Facebook product. Whereas those who already have their accounts on Facebook, Facebook Messenger, or other products, might already have shared data with the tech giant. Hence, it’s now purely a matter of choice for them to decide whether to continue with WhatsApp or not.

Do you plan to switch from WhatsApp to any other app? What’s your preferred IM app? Do share your thoughts with us

How to Receive A Fax through Web Browser

I appreciate, cause I found just what I was looking for. You have ended my four day long hunt! God Bless you man. Have a great day. Bye

All that extra data it’s now “theirs” to fuel the Facebook advertising machine.

FB has every inventive to starve and kill off the chat products that aren’t Messenger; or fold apps into being simply part of their FB/Messenger app. It is sneaky and increasingly hated to keep getting “their” data harvesting, privacy intruding, money grubbing, greedy, annoyingly frustrating and ugly advertising bohemeth.

Ask your contacts to use Signal. Touch anything FB as little as possible. Spread around the love. Smile more 🙂

I don’t like to share my photos and contacts. I am not believing in the privacy. I don’t like to be controlled for example, why I am writing. If I am not agreeing with something, I am banned. It is not a free country, and free thoughts.