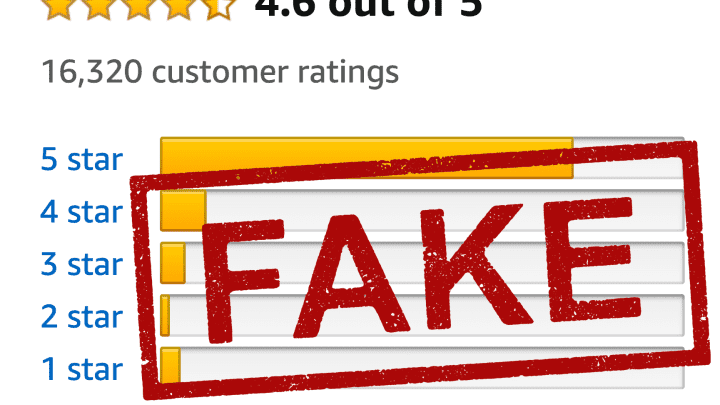 Reviews are one of the main factors that help retailers to increase their sales. Many sellers apply different techniques to get more reviews or to improve customer experience.

Yet, some vendors think that they can find an easy way around. They increase their products and brand’s popularity by using fake reviews. Today we will tell you why you shouldn’t be involved in such activities and how to avoid fake products on Amazon.

Amazon has an ever-growing market and competition. That’s why every factor that can increase sales plays a huge role. Feedback is among the most important ones.

It’s hard to underestimate the effect that reviewers have on sales. They can be a determining factor for your buyer’s purchase-making decision. Retailers on Amazon should find new ways to increase the number of honest, unbiased reviews. Using SageMailer, they can improve their customer service, quickly solve client issues, and promote their products.

As the number of sellers on the platform continues to grow, new issues continue to arise. One of them is a chance that some fraud slips through the net of Amazon client and security service.

Lots of retailers who seek easy success use fake reviews to improve their ratings and financial performance. They are aware that their activities are in breach of  Amazon TOS. Still, these sellers use the scam to mislead customers into buying their items.

Today we will show you the methods that Amazon retailers apply to deceive their buyers. But before that, you should remember one thing. No matter how hard these retailers try to cover up their fraud, they will eventually get caught. That’s why you should nip in the bud the idea of using scams to become successful.

Amazon prohibits retailers from incentivizing the buyers. That means that they can’t ask specifically for a positive review. The only way around is to request only fair and honest feedback.

If you don’t want to get banned, you should avoid proposing discounts, compensations, or awards to leave positive feedback. Retailers often apply this method on their social media pages.

For example, they make a lottery that requires a high rating and positive review on their item to participate. Also, they offer some bonuses to clients who left an unpleasant or negative review. In such a way, they can encourage them to edit the reviews. That means that they are just trying to buy high ratings and positive feedback. Here are the best methods to remove negative feedback.

Sometimes buyers themselves uncover such illegal actions. For example, they often thank retailers for giving them a discount in their reviews. If Amazon’s support client or any retailer sees such a review, they can assume that it is incentivized.

If you are sure that the reviews on Amazon are fake, watch out and avoid such sellers. Also, don’t forget to report these comments. Remember: one of the ways to help the platform improve is to remove fake Amazon reviews.

You may wonder, “how can I avoid such fraud on Amazon?”. If you don’t want to become the scammer’s next target, we have some tips for you!

First, be attentive while scrolling through reviews. There, people share their “field experience” with the purchased item. Consider every aspect of it and process as many reviews as possible. Only then can you be sure that this isn’t a fraud.

Look for words “award, discount, gift,” etc. These are the most popular ones used in incentivized reviews.

Also, you may see that a client states that the seller proposed some bonuses to edit their feedback. If so, you should be more careful while working with this particular retailer. Also, don’t make a purchasing decision just by looking at the item’s rating. It’s easy to fake the star rating of the product, but faking all reviews is much more challenging.

Far Too Many Photos

Let’s be honest: the average buyer on Amazon is too busy (or probably lazy) to spend lots of time taking multiple photos and videos for a review. Most clients don’t even bother themselves with such an “unnecessary” activity as leaving their text feedback on the purchased item. That’s why reviews with many product images should always be treated with a little bit of caution and suspicion.

Again, social media groups play a big part in spreading this plague. For example, a reviewer can receive an award or increase his chance of winning the lottery by adding several photos to his positive review.

Positive Reviews: When Is Too Much?

Some of you may be impressed that this is even a problem. Most Amazon users consider the high rating item with lots of positive comments a safe purchase. If they see many 5 star reviews, they probably don’t care if the reviews on Amazon are real or not.

But don’t let the scammers deceive you!  Of course, you shouldn’t overthink too much and consider everything a fraud. But remember that one can never be too careful!

Let’s imagine a situation when you want to buy an item from a relatively new retailer on Amazon. Then, you find out that their items have almost 5-star ratings and dozens of positive reviews.

But how could it be? This retailer joined Amazon only a couple of months ago and isn’t famous outside of the platform! If you encounter such a retailer, do additional research and analyze the reviews.

Scammers often try their best to make their listing look completely normal. Still, there are some “red flags” that should be considered. Many similar reviews (copypaste) and comments left by the same accounts and adjusted ratings show that something is wrong.

Other Tactics Used By Scammers

Also, we would like to share some methods that retailers apply to blend their fake reviews among the real ones. It will help you better understand their strategies and make you more confident in your actions.

Deceivers often use the implications of account theft. They use it to cover up the fact that they incentivize buyers to edit or write their reviews. It’s easy to say that the buyer’s account was hijacked and was used to leave a positive review and a high Amazon product rating. In this way, retailers can easily get away with the fraud.

But the most popular tactic is the creation of visible diversity. From the first look, the listing’s review section may seem normal. Still, if you pay more attention, you can find some alarming signals.

For example, you’ll see many similar comments with a single difference between them (e.g.size or color of the item). If reviews repeat each other word by word, they are probably fake and create a visible diversity.

Yet, scammer’s Amazon reviews authenticity is pretty low. A trained eye can spot them. To become such a professional, seek to improve your fraud-evasion skills.

It’s crucial to know the tactics of who you’re up against. The only way to combat fraud as a buyer is to spread further Internet literacy and knowledge among your friends and family. Using a collective approach, we can make Amazon a much better place!

We hope that with our help, you will avoid any fraud and scams while using Amazon.  Be careful and pay attention to our tips!

Can You Get Into a Grad School Without Taking a GRE?