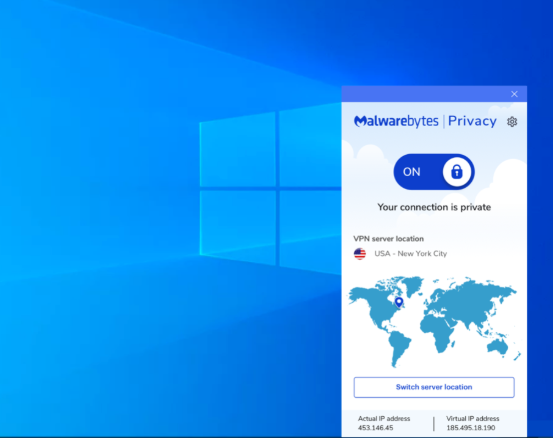 The popular antivirus provider Malwarebytes has now expanded its domain for users. The firm has now launched a dedicated VPN ‘Malwarebytes Privacy’ for Windows users.

Reportedly, Malwarebytes has now introduced its dedicated VPN service for Windows users, ‘Malwarebytes Privacy’. It is a new product as advertised on their website, which claims to deliver speeds faster than old VPNs.

Some features of this VPN, as announced on their site, include,

While that is all the vendors claim, Bleeping Computer has also shared a review of this VPN. As revealed, the VPN offers 30 different countries to the users to choose their desired location. Whereas, for the United States, the VPN offers locations in 10 different states.

As told by Malwarebytes, the VPN relies on the modern WireGuard VPN implementation. They further explained that they merely created the app around the VPN infrastructure developed by a third-party. As stated by Lawrence Abrams,

This is not a white-label service, but rather one they developed themselves.
A trusted-third party built the network infrastructure, and Malwarebytes developers created the app and other components.

While Malwarebytes Privacy claims no-logging policy, more details are yet to surface online about how this would work.

Presently, Malwarebytes Privacy is available for two different pricing plans. The basic version is available for $59.99 per year supporting up to 5 devices. Whereas, the other plan (Privacy+Premium) offers a combo of VPN and antivirus for the users against $89.99 per year.

For now, the VPN supports Windows systems only. However, Malwarebytes has plans to launch the tool for Mac, Android, iOS, and ChromeOS users as well in the future.

Getting Started in Cybersecurity – Training and Career Options